Akshay Kumar begins shooting for 'Singh Is Bliing' in Patiala

Mumbai: Akshay Kumar is back in his turban, to begin shooting with Prabhu Deva for his upcoming film ‘Singh is Bliing’. The actor flew down to Patiala to commence the film’s shoot.

Before the team could begin shooting on the first day, they paid a visit to a Gurudwara to seek blessings. The Khiladi took to Twitter to express his excitement for the first day of the shoot. He posted, “In Patiala, started the day with Waheguru's blessings at the Gurudwara and now it's time for day 1 of #SinghIsBliing!”

The unit even decided to bling out the clapper keeping in mind the film’s title. Ashvini Yardi, the film’s producer also shared a picture of the unit’s visit to the Gurudwara. She posted, “Started with the blessings at the Gurudwara #SinghIsBliing #blessed @akshaykumar.” 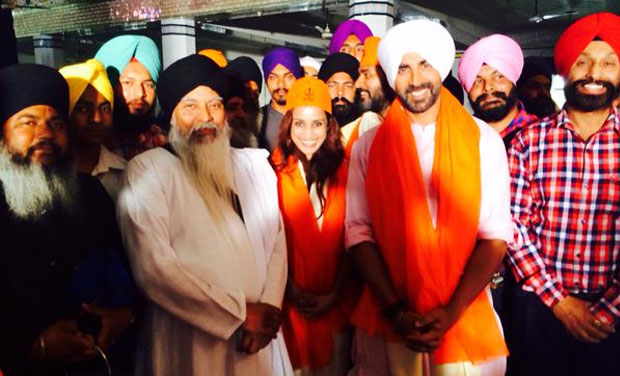 ‘Singh is Bliing’ is said to be a sequel to Akshay’s 2008 blockbuster ‘Singh is King’. The film also stars Lara Dutta and Amy Jackson as the leading ladies. This is the second time Prabhu Deva and Akshay are coming together for a film. They previously worked together on ‘Rowdy Rathore’.

Initially ‘Heropanti’ actress Kriti Sanon was cast opposite Akki in the film, however she opted out after constant delays in the film’s schedule. If all goes as planned the film will most likely release on October 2.

Deepika brutally trolled for her ‘Chhapaak’ look on social media

No Panga for Remo D’souza