Picture Courtesy: New England Journal of Medicine
A man, 62, was found to have a giant ‘boiled egg’ inside him, pressing on his bladder and causing him to constantly to go to the loo, The DailyMail reported. The man came to hospital complaining he had felt a frequent urge to urinate for more than 20 years. Doctors found a ‘free-floating, smooth, firm and rubbery’ lump near his abdomen. The mass measured an incredible 10cm in length and 7.5cm wide.
What the doctors discovered inside a 62-year-old patient looks like a giant egg, and parts of it had a "firm and rubbery" texture similar to a hard-boiled egg. But this was no egg. It's called a peritoneal loose body, and according to one of the doctors that had it surgically removed, this is the largest specimen of its kind reported in medical literature to date. 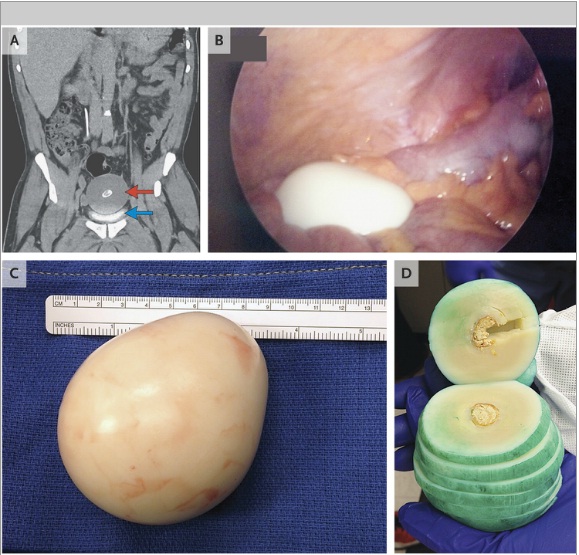 Picture Courtesy: New England Journal of Medicine
In this case, because of gravity, the mass sat on top of the patient's bladder in his pelvis.  This led to increased urinary frequency, which he reported over a course of 20 years. After it was removed, frequency turned to normal according to the article published in the New England Journal of Medicine.
...
Tags: doctor, new england journal of medicine