Sushant Singh Rajput has a dark side: Dibakar Banerjee

The Deccan Chronicle office in Mumbai played host to two very special guests on Thursday afternoon. On the eve of the release of their film Detective Byomkesh Bakshy (based on the popular Bengali fiction series by Sharadindu Bandyopadhyay) director Dibakar Banerjee and actor Sushant Singh Rajput spent an hour with us, discussing their film, its inspirations and influences. Dibakar let us know that this was a dream project, one that was aimed at the youth of India. And as for Sushant, well, he let go of a bigger budget production so he could be part of Byomkesh — an indication of his faith in the story. Excerpts from the conversation:

Is Byomkesh based on one particular story?

Dibakar: We have reinterpreted a lot of the material but the Byomkesh we know, (is over a span of) 31 stories. And just one film will not give the whole flavour to the audience so we have bought the rights to the entire canon and elements from that reflect in this one film, so the audience gets the whole range in this one film. This film also happens to tell how Byomkesh became Detective Byomkesh.

Did you have Uttam Kumar’s Byomkesh in mind while making the film?

Sushant: Dibakar told me to watch the film and said, “This is what you will become during Byomkesh because the Byomkesh in my film is very young. He is not seasoned, he is making mistakes, he is learning.

Probably by the end of the film he will graduate to being the Uttam Kumar of Chidhiyaan Khana.”

Dibakar: We saw Chidhiyaan Khana to know what we could not do. It has a mature Byomkesh.

There was a leaked video that gives out the suspense of your film.

Dibakar: It will not take away anything from our film.

Were you scared about adapting a literary classic into a film?

Dibakar: I was not scared then, I am scared now. Filmmakers live on a huge high when they get a script and their team ready but as the day comes, (they begin to get nervous though) some manage to hide it. I won’t hide it this time, now I am scared. DBB will be a revelation or a shock. Now we wish that it will be a pleasant shock.

Dibakar, your take on Sushant?

Dibakar: I think Sushant has a very pleasant exterior and hides a pretty dark interior. He is one thing in public and one thing in private. When an actor is like that, they can play good detective roles. I think there are depths to Sushant that he is not giving other people access to. 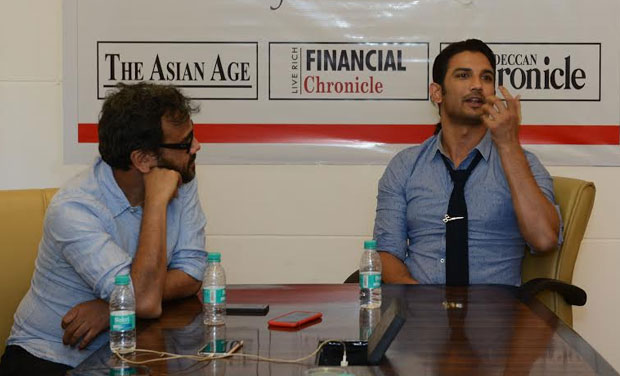 Sushant, how much of a detective are you in real life?

Sushant: I am a bit suspicious. I think everybody else is too. I think when you talk to somebody you are continuously thinking what he/she is thinking about you or how we are perceived. In that case we are guessing all the time. I think I just punctuated that emotion that’s inside of me.

Do you keep tabs on Ankita?

Does she tell you everything?

Sushant: I get to know everything!

Dibakar, tell us about getting the script and casting right for DBB.

Dibakar: Detective Byomkesh Bakshy was a long-standing dream and Sushant had an offer to go and do a much more commercial and a much more lucrative film at the same time. He gave it up. I could have easily done another film which follows on the ranks of Khosla Ka Ghosla, Shanghai, LSD, which would be quirky and for a slightly more niche audience and continued with my “johla-wala” image. Byomkesh was my attempt to connect with the 16-year-old in every audience member because I wanted to share the joy of sharing a pure story, a pure character with the audience. There is no social subtext above the script or above what the characters are going through.

Sushant, tell us about the transition from playing a not-so-successful cricketer in Kai Po Che to playing M.S. Dhoni.

Sushant: I made myself believe that I am the captain of the Indian cricket team, and everything (that) goes with it. I have been training for a really long time so that every shot that he (Dhoni) plays, is a part of me. There are so many things about the man that we probably don’t know and that’s precisely why we are making the film. Knowing him inside out is a big challenge. I will do everything that will make me believe that I am him.

Sushant you’re spotting more at TV industry parties rather than those hosted by the film fraternity.

Sushant: I normally don’t go to parties but six years ago, I had very few friends, and the last two or three years have been very hectic. I have been continuously working; there are no friends I’ve made over the last 2-3 years. Also somebody told me that now that they are doing films they won’t go for those (TV) parties. But no, this is not true. All the technicians, all the actors irrespective of the medium, they work equally hard and I make sure that I attend their parties.

What about Ankita’s big Bollywood break?

Dibakar, tell us about meeting Aditya Chopra and working with Yash Raj Films.

Dibakar: It was basically Adi and I. Adi wanted to meet me for quite some time, it took me about six months after that initial discussion to go around and meet him. I thought Adi would ask me to make a film for him but Adi said something completely different and that’s why we are here. He told me “Let’s work together” and gave me the reason why we should do that. (He said) “Although we are poles apart, looking at your film, the similarity I see is that you believe in your film as much as I do. It is a very risky thing and people will blame me for being intellectual and blame you for being a sellout”. He wanted to change the taste of the Indian moviegoing audience a bit. He said he is nervous about saying it outside, as he may sound a bit ambitious. “Let’s do something mad at least to amuse (ourselves),” he said. The good thing was that Adi was on fire for DBB. He said this is it! 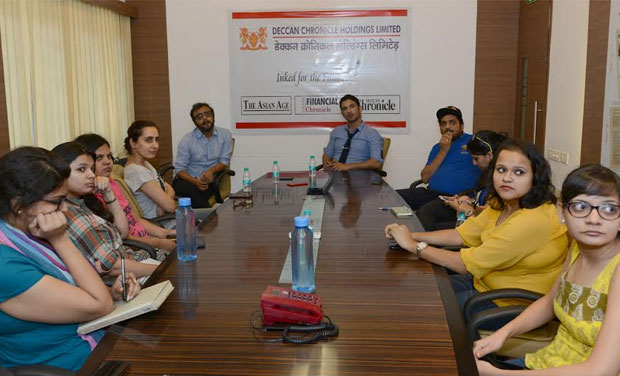 Here are highlights from the interaction.

The exposition scene is the main pillar of the climax of #DetectiveByomkeshBakshy : Dibaker

The leaked video will not take away anything from the film, I don't give a f*** about the video : Dibaker Banerjee pic.twitter.com/wqRJHIxz0i

DBB was my attempt to connect with the 16 year-olds in every member of the audience : Dibaker Banerjee #DBB pic.twitter.com/NzingqWPdB

It was a cakewalk with the Censor Board, says Dibaker Banerjee pic.twitter.com/PfHgTfb2Wm