Vijayawada: Voting for the Krishna and Guntur districts Teachers’ Constituency MLC seat ended in Guntur district peacefully, barring some minor incidents. While in Vijayawada, an incident of cash being distributed to voters came to light.

In Vijayawada, currency notes of `500 and `1,000 were found strewn on the roads at the Pushpa Hotel polling centre. Police took three persons, who are said to be Telugu Desam sympathisers, into custody in connection with the case. The three were identified as S. Srinivasa Rao,  S. Venkateswara Rao (both teachers), and farmer Kadiyam Subba Rao.

The TD and the AP United Teachers Federation had set up tented counters to distribute voters’ slips on the road near the polling booth at the Bishop Azariah Girls School.

At around 12.30 pm, accusing those manning the TD counter of distributing cash to voters, CPM activist Vishnu and another person “attacked” the counter and gathered cash `13,000. The others  at the counter threw the currency notes on top of the tent and over the roof of the buildings behind the counter and fled the spot. 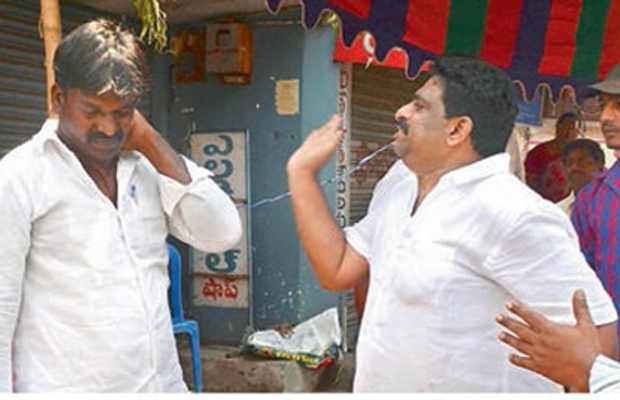 Following protests by the UTF activist, the police took the three persons, who were caught red-handed, into custody.

“We have written to the court following a report by the local election observer, Pasupuleti Polish. The case is non-cognisable and we will arrest all those involved once the court grants permission,” said Suryaraopet inspector Ch. Ravikanth.

Former MLC Boddu Nageswara Rao, who seized the cash, handed it over to urban tahsildar M. Siva Rao who recorded his statement. Officials later collected the cash strewn on the tent and on nearby buildings.

Polling started in 110 polling stations of Guntur district at 8 am and by 10 am, 20 per cent polling was registered. The pace picked up during the day and at end of polling, 72.7 per cent of votes were cast in Guntur district while Krishna district registered 65.3 per cent voting.

Meanwhile, leaders of the United Teachers’ Forum objected to the visit of minister P. Pulla Rao and others to the Hindu College polling station and staged a protest for some time.

YSRC Teachers’ Federation leaders, meanwhile, refuted rumours that the Federation was supporting TD-backed Ramakrishna and said that the TD leaders were spreading falsehoods to sway the voters.

Scramble to be in KTR ‘Cabinet’