Hyderabad: Nearly 200 engineering colleges from Telangana have asked the All India Council of Technical Education for permissions to reduce their intake from the upcoming academic year while about 41 colleges have applied for closure.

Portraying the stark divide between Telangana and Andhra Pradesh, AICTE officials informed that almost all the closure and downsizing applications were from TS colleges while a few for opening of new engineering colleges and increase in intake were from AP. 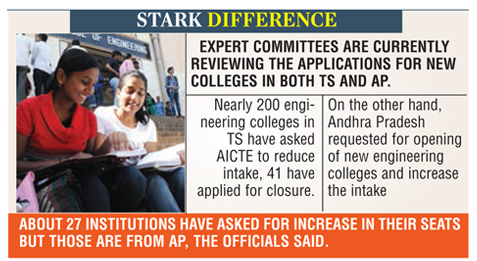 “We don’t demarcate applications on the basis of states but as far as we have seen, applications for new colleges are mostly from AP and the closure applications are from TS,” an AICTE official said.

AICTE officials said they were yet to begin processing of applications for reduction or increase of seats.

Engineering colleges are required to obtain No Objection Certificates (NOC) from the state government and affiliating university for closing some courses or cutting down intake in certain branches of Engineering.

This year, AICTE officials informed, 41 applications have been received for complete closure of colleges while nearly 200 Engineering and other professional colleges have requested permissions to cut down their intake.

About 27 institutions have asked for increase in their seats but those are from AP, officials said.

Why is no farmer celebrating farm bills, KTR asks Centre

No restriction be imposed on inter-state movement of medical oxygen: Centre to states