Hyderabad: Increasing number of flight delays and sudden cancellations at a short notice have been plaguing passengers lately.

On Tuesday, about 40 SpiceJet passengers staged protests at the Rajiv Gandhi International Airport over a Pune flight getting delayed by several hours. This was the fifth such agitation in the past six months.

“After the boarding was completed, a delay of 15 minutes was announced. There was no announcement for one hour and the flight was delayed overall by 2 hours 50 minutes. I missed my business meeting, for which I was travelling to Pune. This is the second such incident within a span of 15 days,” said Mr A.A. Mukheem, a passenger on the delayed SpiceJet flight. 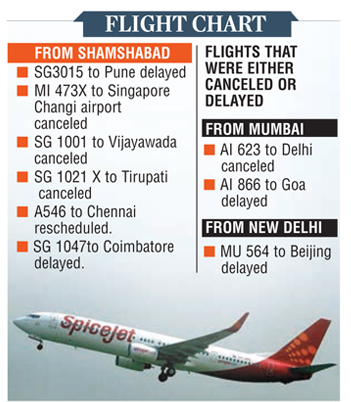 Another passenger could not make it to a house warming ceremony. “I had intended to reach by 12.30 for the ceremony to be part of the family but the 10.50 flight was delayed by 2 hours 50 minutes after boarding. I wasted my entire day and fare money to reach somewhere I no longer needed to be. It is very frustrating after taking an off from office and spending time and money to be part of an occasion and not being able to,” said an agitated Mr R. Rao.

Delays of 15 -20 minutes are considered normal as per insiders at the airport but of late the delays have been getting longer. “On Tuesday, the flight was delayed after boarding due to technical faults. These kind of last minute clearance issues have increased of late, delaying flights and sometimes leading to cancellations,” said an insider.