Most violations refer to vehicles driven on the wrong side and lane violations. (Photo: DC)

Hyderabad: The Outer Ring Road has emerged as the hub of road rule violations as compared to any other road. More than 250 violations were reported in the high speed corridor in a single week, when the Cyberabad police conducted an enforcement drive.

Most violations refer to vehicles driven on the wrong side and lane violations. Four patrolling vehicles and electronic surveillance at some points are cracking down on the violators on a daily basis. Cops say the main reason for increasing road accidents on this high speed corridor is because of these violations. 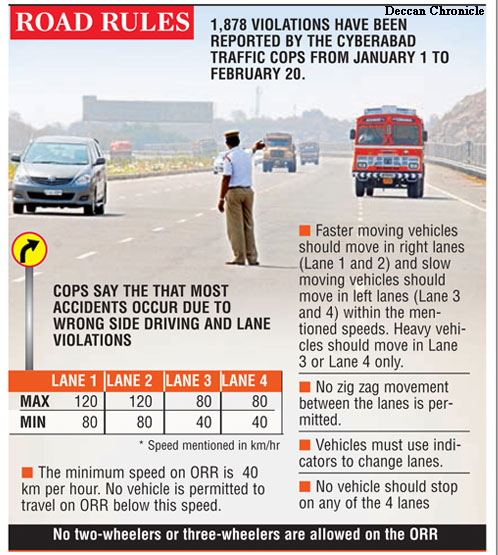 Police say the lanes on ORR are assigned for vehicles as per their speed and size. “On ORR, the driver should take the lanes as per their speed. There are also precautions to be taken, when switching lines. However, many ignore it leading to fatal road mishaps,” said a top traffic cop from Cyberabad.

Stationery vehicles on the road side are another serious issue. Many vehicles have crashed into stationary trucks those were parked on the side due to mechanical failures. “Parking on the road side without taking enough precautions also leads to accidents. According to our rules, when there is a mechanical failure and the driver has to park the vehicle, he should park it on the extreme left lane (service lane). Switch on hazard lights (parking lights) as indication for other vehicles. Put up reflective signs at about five meters away from the vehicle on the rear side and on the front side of the vehicle. If the driver does not follow these instructions, he or she will be booked for road rule violations,” said a senior police official from Cyberabad.

Another serious problem, cops point out is commuters using exit points as entry points and visa versa. These errors also cause road mishaps at the entry-exit points.

Cyberabad police say as the enforcement by police increases, the accidents have come down.

In the last two months alone, police have collected Rs 15,13,100 as fine from drivers.