Hyderabad: A recent bird survey conducted in the stretches of the northern Eastern Ghats shed light on the avifaunal richness of the region, as more than 200 bird species were documented. The forests of the Eastern Ghats have been less fortunate when compared to the Western Ghats, in evincing attention from academicians.

The first of its kind bird diversity survey was conducted by researchers of Ashoka Institute for Research in Ecology and the Environment, a Bengaluru-based institute.

The survey was conducted from December 8 to 12 last year in forest areas around Narasipatnam, Lambasinghi, Chintapalle, Sileru, Donkarayi, Mothugudem, Chinturu, Pochavaram, Maredumilli and Araku. “In just five days we sighted 205 bird species and information like bird abundance, diversity and flock sizes were recorded,” said M.V. Prashant, one of the researchers. 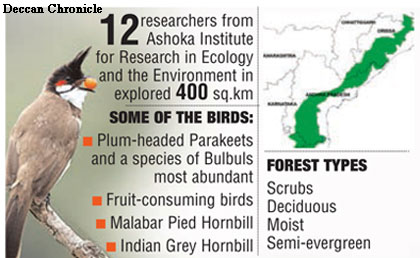 Another researcher, Vikram Aditya, said, “The most interesting aspect of Eastern Ghats is the diversity in the habitats in the region. In some places, the habitats change within 15-20 kms. So, the birds that dwell in these distinctive areas are also different, diverse and unique.”

Twelve ATREE researchers, in teams of six, surveyed 400 square kilometres. Mr Aditya said, “Many bird species present here are the ones that are found in the faraway Western Ghats, northeastern forests and are not found anywhere in between.”

A total of 12 ATREE researchers comprising six teams accompanied by local volunteers explored about 400 square kms for the survey. Mr Aditya said, “We crisscrossed forest types like scrubs, dry deciduous, moist and semi-evergreen, irrespective of the type of forests and one of the most abundantly found birds in the forests were the Plum-headed Parakeets (Psittacula Cyanocephala) and species of Bulbuls.

Barbets and a few species of fruit consuming birds were fairly common in most areas that help immensely to disperse seeds of trees in the forests. The Malabar Pied Hornbills (Anthracoceros Coronatus), a large threatened bird species was also found in a couple of habitats in packed flocks. We also sighted Indian Grey Hornbill. Insectivorous birds were also commonly found. Many bird species present in this region are the ones that occur in faraway Western Ghats, North-eastern forests and primarily seen in the forested hills and no where in-between. Brook’s Flycatcher, Jerdon’s Baza were a few of the relatively rare species sighted during the survey.”