Telangana Chief Minister K Chandrasekhar Rao,
Hyderabad: The first full-fledged Budget of Telangana is set to undergo some changes depending on the financial help the Centre will extend to the states in the backdrop of Niti Aayog replacing the Planning Commission. CM K. Chandrasekhar Rao expects more clarity on Central government policies and programmes, especially grants to states under various sectors once the Central Budget proposals are out on February 28.
KCR has asked finance minister Etala Rajender and his team of officials to go ahead with the preparation of the state budget that should be adaptable to changes in accordance with the Union budget. The state budget will be presented in the Assembly on March 11. Sources said that KCR had told senior officials that the Modi government at the Centre was considering the 2015-2016 Budget as a transit budget and the next budget, for 2016-2017, would be a full fledged one.
Stating that Mr Modi was undertaking a qualitative change in governance through Niti Aayog and was planning to prune centrally sponsored schemes from the present 122 to 66 or totally scrap all the schemes, he said a clear picture would come only on February 28 when the Central budget was presented. “There is still confusion. We supported the Prime Minister’s plan to prune or scrap all centrally sponsored schemes. 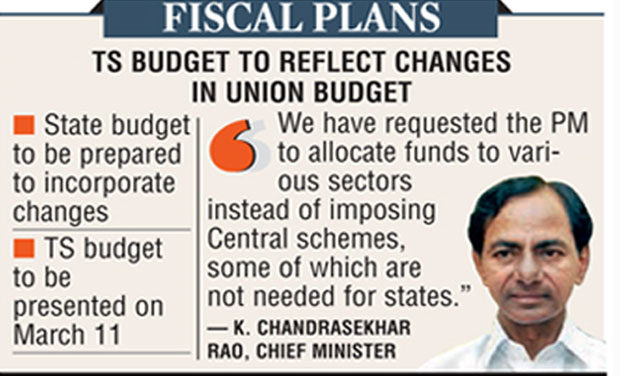 We instead requested him to take a macro level decision and allocate funds to various sectors like education, health and others so that the states can utilise it appropriately instead of imposing schemes, some of which are not needed for states. There has been a positive response from the PM,” KCR said. The CM also pointed out how states were forced to implement some of the centrally sponsored schemes whether it was required or not and bear 30 per cent of the cost of the scheme while the Centre provided 70 per cent.
“You can find 20 or 30 buildings in Hyderabad, Rajendranagar and other places which are built using Central funding. Because the funds are released for a particular scheme and have to be utilised, buildings are constructed but are lying idle. States should have the choice to decide utilisation of funds wherever required. They are public funds and needs to be utilised judiciously,” he added.
...
Tags: politics
Location: Telangana

10 additional judges sworn in as judges of Karnataka HC

Amarinder hits out at Gandhi siblings: 'They are misguided'