Hyderabad: Speculation was rife in political circles that the Telangana Rashtra Samiti would join the NDA government at the Centre, even as Chief Minister K. Chandrashekar Rao had a one-on-one meeting with Prime Minister Narendra Modi.

Sources told this newspaper that Mr Rao met Mr Modi without any aides on Monday evening, triggering widespread speculation that the meeting was to lay the groundwork for the TRS formally joining the government at the Centre.

During his earlier meetings with Mr Modi, Mr Rao had always taken his aides and senior leaders with him.

There are also rumours that TRS secretary general K. Kesava Rao and Mr Rao’s daughter and MP, Ms K. Kavita, will be made Union ministers if the CM decides to join NDA. 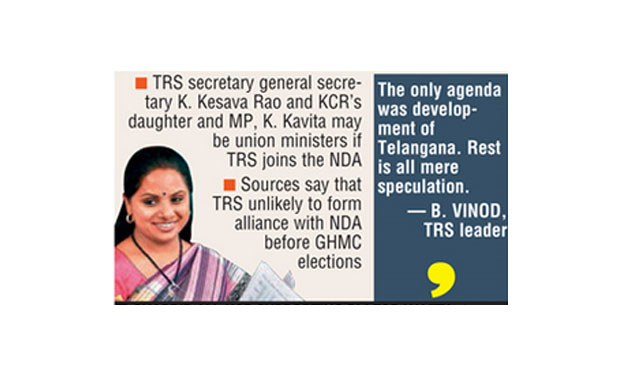 The TRS, however, officially dismissed suggestions that the meeting had any political connotations. Senior leader B. Vinod telling this newspaper that the only agenda was development of Telangana. “Rest is all mere speculation,” he said.

A party source said that Mr Rao was unlikely to join the Union Cabinet before GHMC elections where MIM, an ally of the TRS, is a strong contender.

Kavita, on her part, has dismissed such speculations every time the issue has cropped up.

A senior TRS leader told Deccan Chronicle said that he had checked with the CM’s aide about the speculations and he dismissed the reports as “figment of imagination”.