The accident site near Anekal. (Photo: Shashidhar.B)
Bengaluru: Villagers of Bidaragere played a vital role in rescue efforts before the medical aid and the rescue team reached the spot. Some of the villagers ferried the injured on their bikes to the nearby Anekal Taluk General Hospital where they were given first aid. But as the time went by, the crowd started swelling up, and the rescue personnel had to cordon off the area.
Vishnu, an injured passenger from D8 compartment was finding it difficult to believe that he was still alive. Speaking to this newspaper, he said that his seat was just at the site where the two bogies crashed, pointing his finger towards the crash spot where NDRF were cutting through to extricate trapped bodies. “I was thrown from my seat, my head hit the roof and then I fell on to the floor of the compartment and that saved me of my life, as I saw the place where I sat crashed entirely by the other bogie,” said Vishnu.
But my head was bleeding and I needed help. The impact of the collision had left the doors jammed. Before even the ambulance crew reached the spot, a villager whom I don’t know by name, helped me to come out and took me on his bike to a nearby hospital. I got first aid there and returned back to search for my belongings. I have lost all my educational certificates including my passport,” Vishnu told DC. 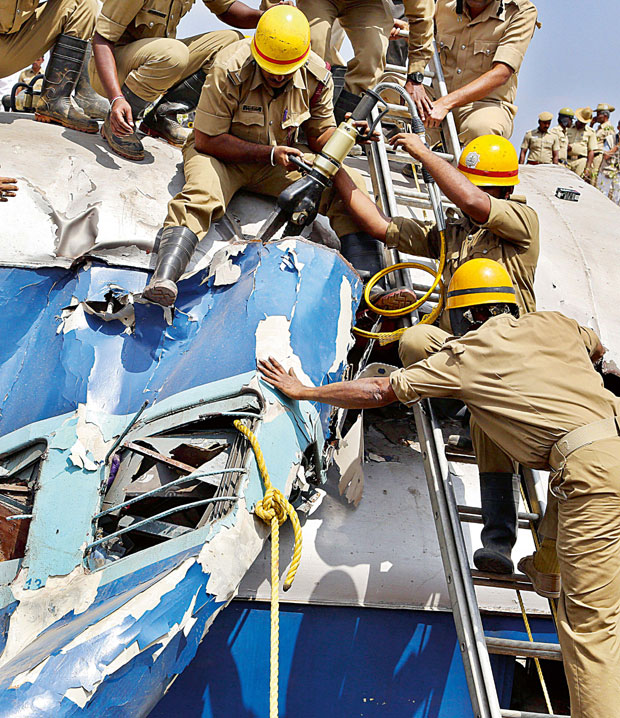 “It all happened within 3 minutes, the train came to a screeching halt with a loud crash. For the first 15 seconds, I could not realise what was happening. Then what I saw was the other compartment crashing into ours and our bogie stuck hitting the rear one. It seemed like the two crashes were closing in on us with huge smoke billowing all over amid human cries,” said G. Sethu Kumar, a software engineer, Seat No. 94, D8 Compartment who was on his way to Coimbatore for a business errand.
Read: Bangalore-Ernakulam express accident: Lucky survivor rescues others
After the crash, many passengers in the D8 bogie remained trapped inside for a while as the closed doors near them were jammed and some of them were unable to move due to their injuries. It was then the villagers who came to their rescue and shifted the people who were movable from the spot to the hospital on their bikes. It was 40 minutes after the accident the first ambulance reached the spot, as there were only kaccha roads leading to the spot where the train derailed, said an officer from the rescue team.
Meanwhile, there are conflicting theories regarding the cause of derailment of Ernakulam-bound Intercity Express on Friday morning. While some said the train may have hit a boulder, others are of the view that the accident may have happened due to overspeeding.
Read: Bangalore-Ernakulam express accident: Ambulance reached late due to poor road
Union Minister for Railways Suresh Prabhu had in his tweet mentioned that train might have hit the huge boulder and derailed due to the impact.
However, Additional Director General of Police (ADGP) Railways R. P. Sharma said the train may have derailed due to over-speeding or due to technical snag in engine or track. Railway officials too disagreed with the boulder theory. Union Railway Minister has ordered a probe to ascertain the exact reason for the derailment of the train.
Account of some of the eye witnesses who nearly espaced death:
I could hear people crying in pain, but could not move from my place because I was trapped inside the mangled remains of the damaged bogie for a few hours
– Kavil, a native of Palakad
No information centres is there at the Anekal government hospital to provided information to people about their relatives
– S.Ramesh, madiwala resident
I am trying to trace a family who were going to Thrissur on a holiday, but I am unable to get any information regarding them from the Government Hospital
– Fr.James Kutty Kandam
Around 7.30 am, I heard a rattling noise before the train toppled to a side and passengers fell on one another. I wish to forget the horrible day
– P Baskar, r.t. nagar resident
...
Tags: indian railways, train mishap
Location: Karnataka