HYDERABAD: Every detail of Hyderabad North Zone, from VIPs to higher officers’ residences, arms holders, educational institutions, ATMs and banks to places of worship, has been included in a manual by the law and order authorities so that police can react all the more swiftly to situations.

The handbook, for instance, contains pictures of habitual offenders. In cases of chain snatching, the victim will be shown the offenders’ pictures at the spot, so that another team can immediately cordon the area where the accused lives and detain the person.

North Zone Deputy DCP, Mr G. Sudheer Babu said, “The manual is called ‘Visible Dynamic Policing We are Just a Call Away’. Every detail of the 66 sq. km has been zeroed in and compiled into a manual; each PS has its own handbook, which is also the profile. This will be given to all officials (of low and high rank). The handbook contains a geographical map of the police limits, so that in case a complaint call is from Bowenpally, the personnel will not only know the site but will be well informed about the routes to reach the spot faster.” 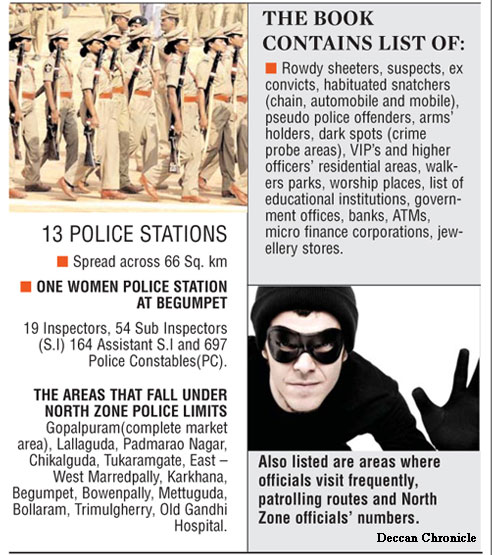 Officials have also formed peace committees in every police limits, these members (usually senior citizens) are not affiliated to any political party. The committees’ help is mainly sought during communal fights.

“Many times communal tension erupts from petty issues; for instance, recently just because one community person splashed water while riding, on a person of another community, the entire area had become tense, the peace committee was brought in maintain harmony. The book has phone numbers of these committee members so that personnel in such situations can immediately call the members to control the situation,” added the DCP.

Begumpet PS limits, which is one of the busiest areas, has reported the highest number of property offences (thefts), followed by Marredpally, Tukaram Gate, Karkhana and Chilkalguda.

In an internal communication, the police has handed out details of identified areas and routes with specifics of commercial and residential establishments to all low-level staff.

Colonies, including gated communities, will see a change in the pattern of patrolling and manpower. For example, if two personnel are designated to patrol a park, the next day a whole team might be present as an element of surprise.

Crime prone areas have been segregated as per location and nature of crime. For example, West Marredpally is known for automobile theft while Lalitha Nagar, Nehru Nagar and Lion Club in Marredpally are prone to cell phone thefts. Jubilee Bus Station is notorious for pickpockets and self phone thefts while other colonies are prone to chain snatching.

Officials have also identified “dark spots” in each area. These are unoccupied and isolated plots, play grounds, community halls, parks, dilapidated buildings, colony corners etc. Officials state that many open plots and municipal playgrounds are turning into gambling sites and places for other unsocial activities.

Colonies will be encouraged to  in-stall CCTV cameras,” said the North zone authorities. The areas that will also see increased patrolling are places of worship, schools and banks.

Villages on banks of Godavari warned of flash floods

Agnipath protests refuse to die down across India

At G-7, Modi in clean energy push for poor