Kalpana Chawla was one of the seven crew members killed in the Space Shuttle Columbia disaster on February 1, 2003 (Image credit: AP)

Kalpana Chawla, the first Indian-American astronaut and first Indian woman in space was one of the seven crew members killed in the Space Shuttle Columbia disaster on February 1, 2003.

Kalpana’s full name is pronounced CULL-puh-na CHAV-la and her nickname was K.C. She first flew on the Space Shuttle Columbia in 1997 as a mission specialist and primary robotic arm operator.

Kalpana Chawla was born on July 1, 1961, in Karnal, India. She was the first Indian-American astronaut and first Indian woman in space. She first flew on Space Shuttle Columbia in 1997, as a mission specialist and primary robotic arm operator.

The name Kalpana means ‘idea’ or ‘imagination’. Her full name is pronounced CULL-puh-na CHAV-la, though she often went by the nickname K.C. As per her academic record, Chawla  completed her aeronautical engineering from Punjab Engineering College in and a masters degree from the University of Texas in 1980s. In 1994, Chawla was selected as an astronaut candidate.

Space.com also stated that Kalpana Chawla  became a crew representative for the Astronaut Office EVA/Robotics and Computer Branches and also worked  with Robotic Situational Awareness Displays and tested software for the space shuttles.

In November 1997, Kalpana Chawla got her first opportunity to fly the space shuttle Columbia on flight STS-87. The shuttle carried a number of experiments and observing tools on its trip, including a Spartan satellite and made 252 orbits of the Earth in over two weeks. On February 1, 2003, the space shuttle returned to Earth and intended to land at Kennedy Space Center. 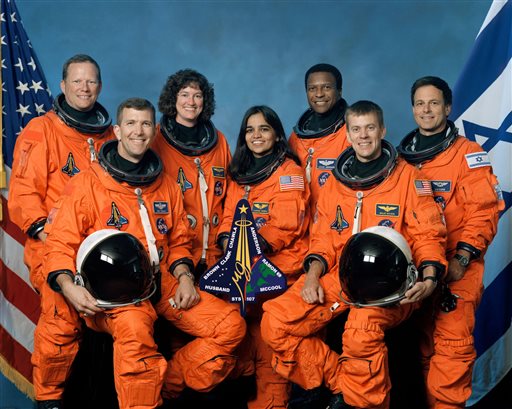 (Above Image: Seven crew members  who were killed in the Space Shuttle Columbia disaster on February 1, 2003; Image credit: AP)

After her first launch, she said, "When you look at the stars and the galaxy, you feel that you are not just from any particular piece of land, but from the solar system." At the launch, a briefcase-sized piece of insulation had broken off and damaged the thermal protection system of the shuttle's wing. Less than a minute passed before the ship depressurized,  killing the crew. The shuttle broke up over Texas and Louisiana before plunging into the ground. The accident was the second major disaster for the space shuttle program.

Chandrayaan-III to be launched in the first half of 2023