A worker employed by a local contractor scrubs the road to the Taj Mahal in Agra ahead of US President Barack Obama's visit. (Photo: AFP)

Agra, Uttar Pradesh: As he scrubs the road to the Taj Mahal on his knees, Ramjeet beams with pride at the thought of US President Barack Obama admiring his handiwork.

"If everything is clean then he will be impressed," said the aching man as he took a rest with another 10 kilometres of road still to be scoured by him and his co-workers.

"It's hard on the knees and back," admitted the cleaner, who is being paid 300 rupees a day for his part in a massive makeover.

Ramjeet is one of 600 cleaners mobilised in Agra ahead of Tuesday's visit by the US president and First Lady Michelle Obama to the world's most famous temple of love.

Apart from cleaning white lines on the roads, authorities have been rounding up stray dogs, clearing cows from the streets, and have ordered a lockdown around the complex.

"There are a lot of spit stains and such that need to be washed away. The streets need to be spick and span," said India's former chief achaeologist KK Mohammed, who has guided world leaders around the white marbled mausoleum. 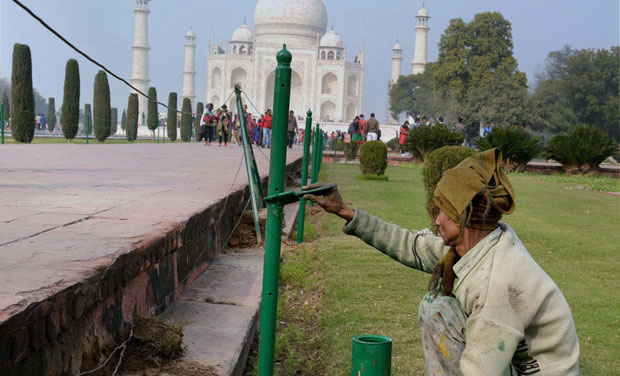 A worker paints poles at the Taj Mahal in Agra (Photo: PTI)

The Obamas' visit will be covered by a massive press pack and organisers want to ensure a picture-perfect backdrop.

Pradeep Bhatnagar, chairman of the Taj Trapezium Zone, a buffer region around the monument, said ongoing beautification work has been halted for 10 days to allow dust to settle before the guests arrive.

Suresh Chand, who is in charge of the clean-up, said stray dogs have been rounded up, and more than two tonnes of rubbish pulled from the nearby polluted Yamuna river in just two days.

Inside the Taj complex, a dozen barefoot women were busy trimming lawn edges with trowels.

"Obama, Obama," one lady, who has worked at the Taj for more than two decades and earns 100 rupees a day, said with a grin.

Some 3,000 police are on duty and will conduct boat patrols of the river, said Agra police senior superintendent Rajesh Modak. 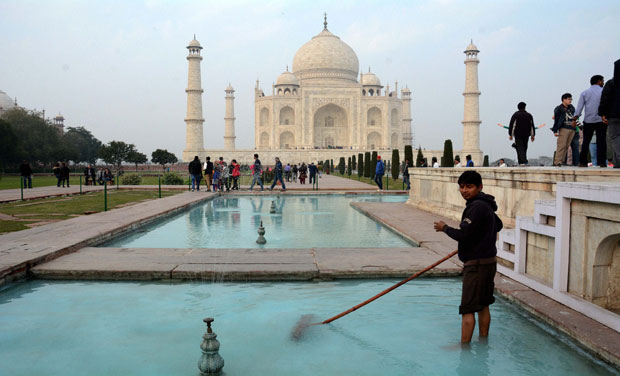 A man cleans a fountain at the Taj Mahal in Agra (Photo: PTI)

Tourists will be turned away while the Obamas are touring the Taj, built by Mughal emperor Shah Jahan as a tomb for his beloved empress who died during childbirth in 1631.

Locals teeming the alleys around the Taj -- which took 20,000 labourers  and 16 years to build -- said they have been ordered to stay indoors.

"We should be open for business and Obama should be allowed to come and sample my world-famous petha," said Sonkar of the sweet made from sugar and pumpkin.

Polling underway for civic polls in Delhi amid tight security

India's history isn't just about salvery, but it's about warriors too: Modi

No person or relation is above nation: PM Modi