Rafael Nadal of Spain holds the racket as he plays Mikhail Youzhny of Russia during their first round match at the Australian Open tennis championship in Melbourne on Monday (Photo: AP)

Melbourne: Rafael Nadal's new high-tech tennis racket looks and feels like his old one. Except for the on-off switch. Call it a "smart racket," the latest advance in tennis technology tells you where you hit the ball - with the help of an app.

Sensors embedded in the handle of the racket, made by Babolat, record technical data on every ball struck. At the end of a match or training session the data can be downloaded to a smart phone or computer and used to help analyze a player's strengths and mistakes. 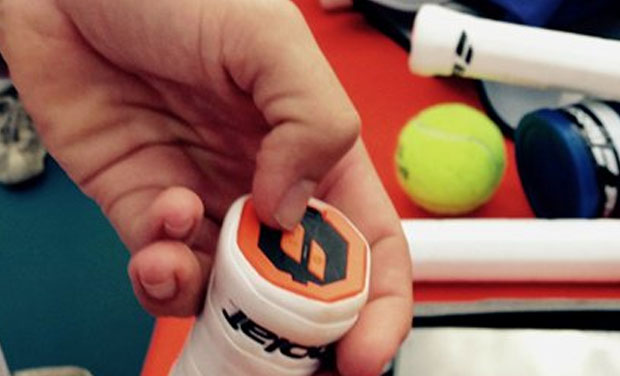 Aside from the sensors, the racket is just a racket. It's the same size and weight as Nadal's old-fashioned former racket.

"I know to play well I need to play 70 percent of forehands, 30 percent of backhands," Nadal said after racing through his first-round Australian Open match over Mikhail Youzhny, 6-3, 6-2, 6-2 on Monday. "If I'm not doing that, I know I'm not doing the right thing on court."

"This (racket) is a way you can check these kinds of things," added the 14-time Grand Slam winner, who was sidelined for much of last season from a wrist injury and an appendix operation.

The International Tennis Federation had previously outlawed what it calls "player analysis technology" during competition but adopted a new rule last January that allows players to wear or use "smart" equipment, like Nadal's new racket and devices like heart-rate monitors that record data about player performance in real time.

Babolat initially fitted the technology into its "Pure Drive" rackets, which are used by Karolina Pliskova , Julia Goerges and Yanina Wickmayer and then incorporated the sensors into a newly-released racket used by Nadal, Caroline Wozniacki and Jo-Wilfried Tsonga.

Don't expect to see players on their iPhones analyzing their game mid-match. An ITF ban on coaching during matches prevents players from consulting the data on court. The way it works is simple, says Thomas Otton, the company's director of global communications.

There are two buttons on the bottom of the racket's handle.

"You press the 'on' button. A blue LED light appears. And, you play," Otton said. When finished, a second button is pressed, activating Bluetooth which synchs the information with a smart phone or other device.

The data also gets more detailed and analyzes, for example, how Nadal hit his forehands - 133 had topspin, 49 had slice and 40 were flat.

Swipe to the next screen and an image of a tennis racket appears that shows where the ball is making impact. For Nadal's practice, he hit 42 percent of shots in the center and 20 percent on top of the racket - the rest on the bottom and sides.

At a demonstration of the racket before the tournament started, Wozniacki and Nadal joked about the pros and cons of knowing too much.

"Sometimes it's not a good thing," said Wozniacki. "Because you think you're hitting it in the middle of the racket, but really it shows you you're not. And there's no going around that."

Nadal's uncle and coach, Toni, joked that the racket would give him an edge. "Sometimes when I correct Rafa on how he's hitting the ball, he doesn't agree." said Toni. "Now I have the data."

Nadal retorted, without missing a beat, "Now he has the data to know that he was wrong."