RBI rate cut: A good time for our economy

New Delhi: A fall in interest rates and low crude oil prices augur well for the Indian economy in 2015. Moreover, after a long period of high double-digit inflation, it is expected to remain at lower levels in coming months unless the monsoon springs a surprise.

Economists are expecting RBI governor Raghuram Rajan to further loosen the purse this year and effect a series of rate cuts in coming months. Most analysts are predicting a 0.75 per cent further cut in repo rates in 2015-16. 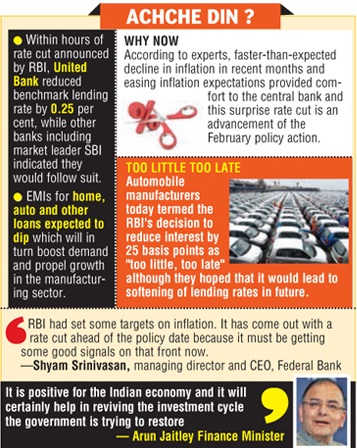 A further cut in interest rates is likely to revive consumer sentiments and push the growth of consumer durables, which have been struggling in recent months, and boost manufacturing. According to the latest IIP data, consumer durables growth had contracted by 14.5 per cent in November.

Even the housing sector, in the midst of a slowdown, is hoping the RBI move will revive growth. Tata Housing managing director and CEO Brotin Banerjee said the RBI’s moves provide an impetus to potential home-buyers in the country. “Cheaper policy rates will also provide marginal relief to customers who have already invested in property,” said Mr Banerjee.

What has come as a boon for the economy is the drastic fall in crude oil prices from around $112 a barrel in June 2014 to $43.36 per barrel (Indian basket crude oil) on Wednesday. Lower petrol and diesel prices for the common people could boost consumer expenditure.

According to an analysis by ICRA, the fall in petrol prices from July 1, 2014 to now is expected to lead to annual savings for two-wheeler consumers of `1,400, and for passenger vehicles `9,400, per annum. The diesel price fall could result in savings of `8,100 per annum. “Savings on fuel expenses would leave additional money in the hands of consumers, which could push discretionary expenditure and lead to higher sales of consumer durables,” the report had said.

Industry, including paint, FMCG and tyres, among others, could be the major gainers due to the fall in the prices of raw materials.