Peshawar: The ancestral home of Bollywood's thespian actor Dilip Kumar here will be repaired and converted into a museum and a national heritage site, said Pakistan's provincial government in Khyber Pakthunkhwa. In the first phase, the damaged portion of Dilip's house in Mohallah Khuddadad at the back of historic Qissar Khwani bazar in Peshawar would be repaired, Director Musuem Peshawar and Research Officer Bakht Muhammad said.

Prior to this, the historic Sethi House (an architectural marvel built in the old walled-city in late 19th century) has been converted into a museum, he said. The construction process of the house would be completed in four phases to bring it back to its original glory, he said, adding, the house would be preserved and converted into a museum so that it could remain a national heritage.
The legendary Indian actor, who was born as Yousuf Khan in Peshawar in 1922, is popular in both countries, and for years, there have been requests in Pakistan for salvaging his ancestral home. 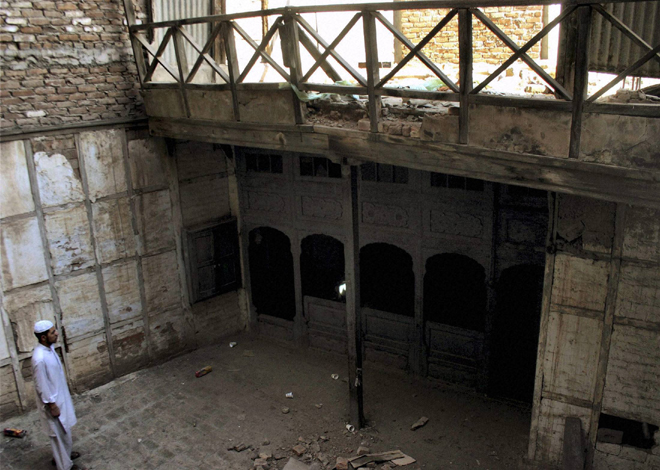 File Photo of Dilip Kumar's ancestral home
The Bollywood actor, also known as 'Tragedy King' for his iconic portrayal of melancholy characters, is so adored in Pakistan that in 1998 it conferred on him its highest civilian award, Nishan-e-Imtiaz (Order of Excellence). The 92-year-old actor also shares a special-bond with the house and it was here, in this house, that, "my sense of storytelling was ignited," Dilip wrote in his autobiography - Dilip Kumar: The Substance and the Shadow.
Two other Bollywood actors, the late Raj Kapoor and Shah Rukh Khan, were also born in the close vicinity of Kumar's ancestral home in Peshawar. Pakistan Prime Minister Nawaz Sharif had last year declared Dilip's house a 'national heritage,' that can promote close cultural relations between India and Pakistan.
...
Tags: pakistan, peshawar, dilip kumar