The cover of the latest edition of Himalay Dhwani, published by Durga Vahini, features Kareena with her face half covered with a naqab. (File Photo)&#13;
Mumbai:  Kareena Kapoor Khan who has been the cover girl for some of the biggest fashion magazine has now found her way to the cover page of Vishwa Hindu Parishad’s women magazine ‘Himalaya Vahini’. Reportedly, her picture graces the cover, highlighting the issue of ‘love Jihad’ and talking about the Hindu women who converted themselves after being married to Muslim men.
VHP's young women’s wing Durga Vahini has allegedly launched a campaign against 'love jihad; by using this morphed photo of Kareena. The photo shows half of Kareena Kapoor's face sporting a sindoor, while the other half is cover by a naqab, with just eyes peering out.
The 'love jihad' campaign which has been launched by Durga Vahini primarily seeks to to re-convert Hindu women who married Muslim men and changed their religion. 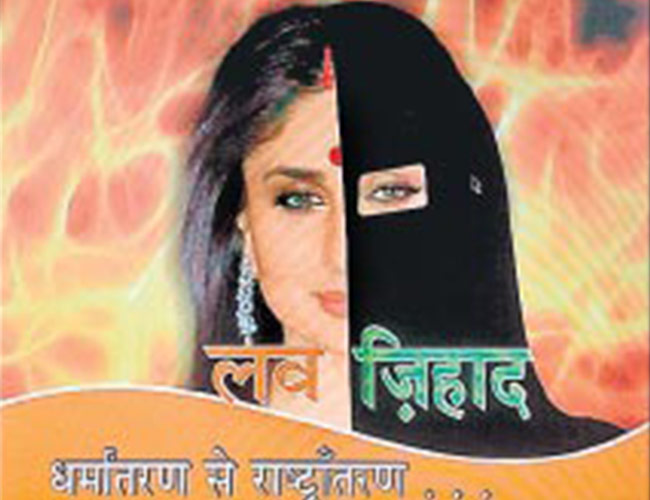 Durga Vahini, is the young women's wing of the VHP where women between the ages of 15-35 are taught self-defence techniques. It has in the past been known for starting riots in Bijnor in 1990 and also ransacking the Orrisa assembly in 2002.  "Sixteen Hindu women, who married Muslim men have reportedly approached Durga Vahini for ghar wapsi. Two of them have already reconverted and one has remarried,” a Durga Vahini leader Rajini Thukral was quoted saying in Hindustan Times.
However Prakash Sharma of the Vishva Hindu Parishad or VHP, which is affiliated to the ruling BJP says actor Kareena Kapoor can sue if she has objections to the photo that has been used. "This is between the magazine and the actress Kareena Kapoor, why drag BJP or Modiji into it? If actress Kareena Kapoor has a problem with this, the doors of Court are always open for her," he commented to ANI.
Interestingly, Kareena's husband Saif Ali Khan has spoken on the issue earlier. Not only has he criticised claims that Muslim men are marrying Hindu women as part of a 'love jihad' to win more converts to Islam, he went on to reveal that he and his wife had suffered death threats and accusations of 'love jihad' when they married in 2012, but said respect for all religions and love between them was the essence of India."We are a blend, this great country of ours. It is our differences that make us who we are. We need to get beyond mere tolerance. We need to accept and respect and love each other. I am the son of a sportsman, I grew up in England, Bhopal, Pataudi, Delhi and Mumbai, and I am more Indian than any Hindu or Muslim I know because I am both," Saif wrote in an article for the Indian Express.
VHP's magazine claims to address the issue of 'ghar wapsi' and stresses that reconversion of Hindu women, who are married to Muslims is integral to the programme.
...
Tags: saif ali khan, love jihad, vhp