Visakha Society for Protection and Care of Animals rescued the monkeys.

Visakhapatnam: In a bizarre incident, recently two monkeys were seen roaming openly with mobile phones near the RTC Complex which drew the attention of the police.

Monkeys running away with fruits or snack items from stalls is a common sight, but monkeys stealing cell phones was a traffic-stopper. Police authorities immediately caught the monkeys and tied them up to a tree expecting the owners of the mobile phones would come searching. However, when no one turned up, they decided to junk the drill and the information was passed on to animal rights organisation in the city. 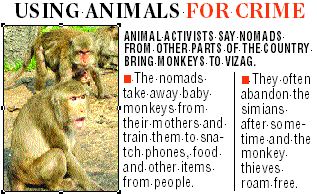 Visakha Society for Protection and Care of Animals rescued the monkeys. A VSPCA official said, “Monkeys are usually not found in and around Vizag. They are brought along by nomads from other parts of the state and sometimes from Telangana. Most of the times the nomads snatch baby monkeys from their parents in a gruesome manner and train the monkeys to snatch mobile phones, food and other items from people’s hands.. Such nomadic groups who depend on their monkeys hard work to earn money stay in a few parts of the city like One Town and near East Point Colony. Often the nomads abandon the monkeys when the latter becomes old or stubborn.”

He further said that this year a few such injured monkeys were rescued by VSPCA and added that it would be helpful if the municipality builds a small shelter for their rehabilitation.

V. Babji Rao, Inspector of Central Crime Station, Vizag, says, “There have been no complaints registered in Vizag about using monkeys for theft. However it is true that gangs exist in neighbouring states, which train monkeys to steal and some of them are coming to Vizag.”

Call to make medical devices in India and reduce imports