Nellore: The year 2014 will remain the most memorable for scientists of Indian Space Research Organisation as they had five most successful launches besides other notable achievements. Two GSLV missions, one in the beginning of the year and the second at the fag end, made the scientists heave a sigh of relief, in the backdrop of the failure of GSLV missions in April 2010 and Aug. 2013.

In addition to this, three successful PSLV missions have enhanced the trustworthiness of India’s workhorse launch vehicle.More than anything, the successful entry of Mars Orbiter spacecraft launched on Nov. 5, 2013 into Mars Orbit in 2014 in Isro’s first ever interplanetary mission is a milestone for the Organisation. In fact the mission led the entire world to acknowledge India’s forays in space technology.

The year started with successful flight test of the Indigenous Cryogenic Upper Stage on board GSLV-D5 launch vehicle on January 5from Satish Dhawan Space Centre Shar, Sriharikota. In this flight, GSLV-D5 launched a communication satellite  Gsat-14  precisely to its intended Geosynchronous Transfer Orbit. The two decade long hard work of Isro’s scientists, after it was denied cryogenic technology, had finally paid dividends with the GSLV-D5 success.

With this, India joined the exclusive club of five nations the US, Russia, France, Japan and China  having the capability to launch satellites to GTO, as the sixth member. The GSLV success was followed by Isro’s Polar Satellite Launch Vehicle, PSLV-C24 with IRNSS-1B satellite, the second satellite in the Indian Regional Navigation Satellite System on board, on April 4. It was the 25th consecutively successful mission of PSLV. The ‘XL’ configuration of PSLV was used for this mission. The same configuration of the vehicle was used five times to launch Chandrayaan-1, Gsat-12, Risat-1, IRNSS-1A and Mars Orbiter Spacecraft.

IRNSS-1B is the second of the seven satellites constituting the space segment of the Indian Regional Navigation Satellite System. IRNSS-1A is functioning satisfactorily from its designated geosynchronous orbital position. IRNSS is an independent regional navigation satellite system designed to provide position information in the Indian region and 1,500 km around the Indian mainland. 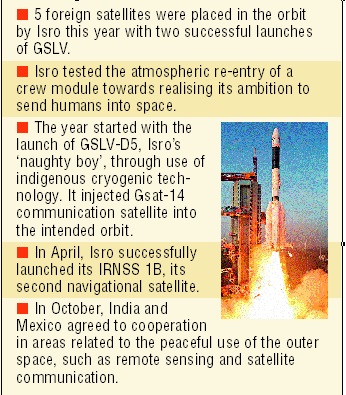