“The President has been pleased to award the Bharat Ratna to Pandit Madan Mohan Malviya (posthumously) and to Atal Behari Vajpayee,” a Rashtrapati Bhavan press communiqué said. Mr Vajpayee, prime minister from 1998 to 2004, has faded from public life due to age-related illness. He is often called the BJP’s moderate face, and is credited with several bold initiatives, including a major bid to bridge India-Pakistan differences.

India’s longest-serving Prime Minister outside of the Congress, Mr Vajpayee’s detractors called him the “mask” of the RSS but still always had good words for him. 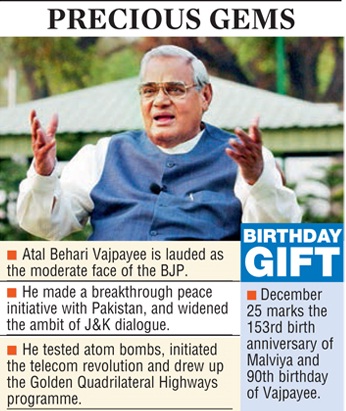 Prime Minister Narendra Modi said the conferment of Bharat Ratna on Pt Malviya and Mr Vajpayee was a "fitting recognition" of the services of the "illustrious stalwarts" to the nation.

Describing Mr Vajpayee as one of the greatest communicators that India has ever seen, Union Minister Arun Jaitley said he made his presence felt at the national level and was committed to peace in Southeast Asia. Several BJP leaders and MPs, including Murli Manohar Joshi, have demanded that the top honour be awarded to Mr Vajpayee. NDA partner Shiv Sena too came out in support of conferring Bharat Ratna to the first BJP Prime Minister.

An educationist with a vision, Pt Malviya’s main achievement was the establishment of the Banaras Hindu University.

Born on December 25, 1861, Malviya was catapulted into the political arena immediately after his first moving speech at the second Congress session held in Kolkata in 1886. He was President of INC in 1909 and 1918.

Pt Malviya is also remembered for his stellar role in the Independence movement and his espousal of Hindu nationalism.