Chennai: K Balachander, one of India’s most prolific filmmakers, passed away at a private hospital in the city on Tuesday at 7.05 pm. He was 84. He was battling prolonged illness over the last one week at Kaveri Hospital where he was admitted after he developed fever and some age-related ailments.

KB began his illustrious career, spanning 45 years, as a scriptwriter for the legendary actor, the late MGR, for his film Deiva Thaai. In 1965 he made his maiden directorial venture, Neer Kumizhi, which was based on his play of the same name in which he featured the late comedian Nagesh in a stellar role. The film became a huge hit besides earning him critical acclaim. The story, set inside a hospital, is about how a terminally ill patient helps unite two lovers before he dies.

Having written scripts and directed over 100 movies, KB discovered Sivaji Rao Gaekwad and rechristened him Rajinikanth, in his 1975 movie, Aboorva Raagangal. He had the uncanny knack of picking up promising actors.

He had predicted that Rajini would go on to become a phenomenon even before his debut film was released. Later, the relationship between the protégé and mentor continued in films, like Moondru Mudichu, Thillu Mullu and Avargal. He has also been credited with nurturing the careers of numerous stalwarts, including Kamal Haasan, Prakash Raj, Sarita and Vivek. His films are usually centred on unusual or complicated interpersonal relationships and social themes. Balachander received his first National Award for Iru Kodugal, released in 1969. 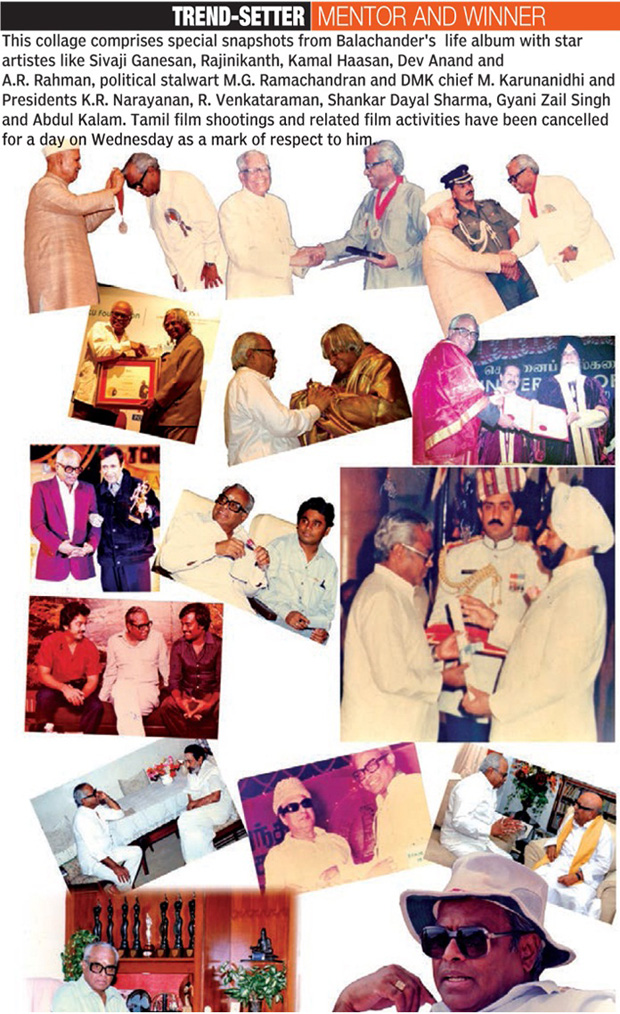 It is sad and shocking! The foremost creator or Brahma, auteur, guru, trendsetter and the legend of Indian cinema K. Balachander sir (KB as we call him fondly) is no more.

He is one among the four filmmakers to have made 100 or more films in Indian cinema and in his demise, Indian cinema has lost a pioneer, a guru and the void can never be filled.

Indian cinema, especially South Indian cinema, today celebrates newness and boldness in plot lines and presentation by new film makers. But, KB was the pioneer in presenting innovative and bold themes way back in the ’60s itself.

After director Sridhar, the first person to have fetched respect to the title ‘Director’, it was KB who ensured that the director stands out first in his films before everything else. So much so, that the audience celebrated when the film carried the brand, a ‘K. Balachander film’ in many languages. What is creditable is that he achieved this great name as a creator, when MGR and Sivaji Ganesan were ruling Tamil cinema during ’70s with their two different kinds or styles of films. KB created a third kind and achieved success amid these two giants. He never depended on big artistes for his films but rather worked with many rank newcomers and earned this name, which is his biggest achievement.

If one looks for the kind of trends he set in his films, we can list many. Noteworthy to mention are: New stories or backdrops in films like Neerkkuzhimi, Major Chandrakanth, Bhama Vijayam, Ethir  Neechal, IruKodugal, Nootrukku Nooru, Punnagai, Arangetram, Sindhu Bhairavi,Punnagai Mannan, Unnal Mudiyum Thambi, Pudhu Pudhu Arthangal, Oru VeeduIru Vaasal, Vaaname Ellai and some more.

When Tamil cinema was hero worshipping in ’60s and ’70s (and continue to do so), he pioneered the concept of women oriented themes and made path breaking and commercially successful films like Iru Kodugal, Arangetram, Aval Oru Thodar kadhai, Apoorva Raagangal, Moondru Mudichu, Avargal, Thanneer Thaneer, Achamillai Achamillai, Agni Saatchi, Sindhu Bhairavi, Kokilamma (Telugu), Manathil  Uruthi Vendum, Kalki and a few more. Till date, no other filmmaker could emulate his success on this front.

KB was clear that films are not meant for just entertainment but also for social reform. He brought in a sea of change in the way films can be made successfully in the backdrop of strong social reform themes.

Prior to KB, many directors made films in other languages like Telugu and Hindi. But, they were only remakes of their successful films from Tamil. KB was the first director from Tamil cinema, to make straight Telugu films and made them a huge success and established his name there as a leading director. Films like Marocharitra, Kokilamma, Tholikotti Kosunthi, Rudraveena stand tall for his achievement there.

Though many credit him for his foresightedness for reinventing Kamal Haasan as an actor, fostering the career of Jayasudha, Jayaprada and introducing many top talents like Rajinikanth, A.R. Rahman,  Prakash Raj, Vivek, Charlie, Nasser, Saritha, Ramesh Arvind, Mohan Raman and many others, what one should appreciate is his resolve to introduce new talents in each of his films and never dependent on big  artistes to make his films. He passed on the baton to his disciples and to mention a few of them – film- makers Vasanth, Suresh Krishna, Saran, Samuthirakani. We can be assured they will continue to keep his torch alive.

KB’s biggest contribution to Indian cinema was his continuous support to new wave films and new filmmakers who made a mark. He was the first to appreciate and encourage good cinema and every filmmaker was looking to get his appreciation. No wonder, when Aamir Khan visited Chennai last year, he visited only KB at his home and took his blessings as KB was fond of his films.

It is sad that Aamir Khan cannot show his latest sensation ‘PK’ to KB, which would have got encomiums from the legend.  Words are not sufficient to pay our tributes to this great legend. However, suffice to say that KB lived his life fully and achieved everything one can in the film industry and his contribution to Indian cinema will remain in the chronicles as historic.

He was a successful writer, director, producer, actor and earned many National awards for his films,  earned the civilian award of Padmashri and the highest award for a film personality of Dada Saheb  Phalke Award and many Tamil Nadu and Andhra Pradesh State Government awards. KB’s last directed film was Poi (False) in 2006. We wish his death is also false! He will remain with us forever through his films though.

Jayalalithaa: Nobody can fill the space he occupied

AIADMK general secretary J. Jayalalithaa has condoled the death of legendary director K. Balachander. In a statement released on Tuesday, she said, “I am extremely saddened to hear the news of Balachander’s passing away. He was a symbol of public humility and modesty.”

Noting that the late director entered the industry through his debut directorial venture, Neerkumizhi, Jayalalithaa said Balachander’s subsequent movies, such as Major Chandrakanth, Naanal and Ethir Neechal, were met with a huge public response.

In her statement, Jayalalithaa also said, “Not only direction, Balachander also excelled in other fields, like story and screenplay and ruled the roost in Hindi, Telugu and Kannada movie industries as well.” Stating that the veteran’s death was an irreparable loss to the entire film fraternity, Jayalalitaa said, “Nobody can fill the space left by him.”