Leaked: Here's the first look at the D-Rex from Jurassic World

Los Angeles: An image which is believed to be the genetically hybrid dinosaur teased on the teaser of 'Jurassic World' has surfaced online.  Comic Book Movie posted an image of a terrifying dinosaur which stands on its two legs, reported Ace Showbiz. Here's what we believe it looks like: 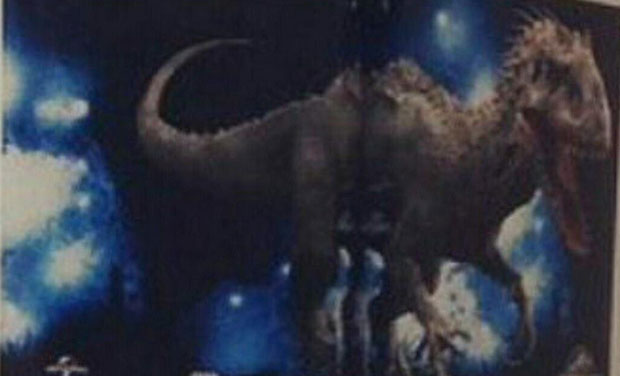 D-Rex was teased in the first trailer of 'Jurassic World' which was released this week.  Bryce Dallas Howard proudly called the creature the "first genetically modified hybrid." The dinosaur, which turned out to be smarter than the scientists' prediction, later escaped from the "cage" and attacked everything that moved.
"'Jurassic World' takes place in a fully functional park on Isla Nublar. It sees more than 20,000 visitors every day. You arrive by ferry from Costa Rica. It has elements of a biological preserve, a safari, a zoo, and a theme park," said director Colin Trevorrow who also wrote the script with Derek Connolly.
"There is a luxury resort with hotels, restaurants, nightlife and a golf course. And there are dinosaurs. Real ones. You can get closer to them than you ever imagined possible. It's the realisation of John Hammond's dream, and I think you'll want to go there."
The fourth installment in the 'Jurassic Park' movie franchise also stars Chris Pratt as a scientist who is doing behavioural research on Velociraptors.  Produced by Steven Spielberg, Frank Marshall and Patrick Crowley, it is slated to hit US theatres on June 12, 2015.
Watch the trailer here:
...
Tags: dinosaurs, jurassic world