10 Years When It Happened

A total of 24,000 people work in 154 companies spread across 32 lakh sq feet of modern work stations.

Kochi: Circa 2004. It was a time when Kerala was desperately pushing itself as an investment destination. It had already held Global Investor Meet, one of the first mega marts a state would hold for potential investors.

It had even set in place a single window clearance system, again a first for a State. There was serious attempt to forge a political consensus on investment and employment generation.

Despite the best efforts, investors kept a distance. The Kerala Export Promotion and Industrial Park (KEPIP) at Kakkanad, one of the ambitious projects to anchor investments in the manufacturing sector, remained a barren land.

And then it dawned on the government to experiment with the information technology industry. The success of the Thiruvananthapuram Technopark also helped the State make such a move.

The government formed Infopark Kerala and transferred 100 acres from KEPIP to it with a mandate to attract IT companies. The grey-coloured standard design factory KEPIP it built for brick-and mortar companies also was transferred to the new company.
Cut to 2014

A total of 24,000 people work in 154 companies spread across 32 lakh sq feet of modern work stations. India’s marquee brands in IT such as TCS, Wipro, Cognizant Technology Solutions, and international brands such as Ernst and Young have anchored their major development projects here, several of them on own their own campuses. Construction of facilities measuring 37 lakh sq ft is fast nearing completion.

Having utilised most of its 100 acres, Infopark has now added another 160 acres as Phase 2 and is aiming at building 8 million sq ft of built up space, with walk to work concept.

“The transformation has been amazing,” says Jijo John, CEO of Calpine group, one of the first companies to set foot on Infopark. “ We were about 30 people on the campus, with seven or eight employees of Infopark.

There was no public transport. During rains, we used to be flooded.” John’s Calpine has since expanded, from five people to about 300 people, and into two other offices.

After refurbishing the Standard Design Factory to suit the looks of an IT building, Infopark built a second facility, Vismaya. It later roped in builders such as L&T and Leela group as co-developers which started adding space regularly.

The first major company to set foot on the campus was Wipro which set up the first green building in Kerala. And the heavy weights followed: TCS has almost completed a 13 lakh sq ft facility.

So is Cognizant, which is building a campus on 15 acres. The Lulu group of M A Yusuffali is investing close to Rs 350 crore to build a 14 lakh sq ft building on the park.

The brand today is not limited to Kochi. It’s now working on a hub and spoke mode. Kochi Infopark is mentoring its younger siblings at Chertahla in Alappuzha and Koratty in Thrissur.

In fact, SmartCity, Kochi, one of the dream projects in the IT infrastructure sector which aims at constructing 80 million sq ft of built up space, can be considered an offspring of Infopark Kochi, as it was originally conceived along with Infopark.

The project, spread over 250 acres, has already taken off and is expected to commission its first phase in 2015.

“The best of Infopark is yet to come,” says Hrishikesh Nair, chief executive officer of  Infopark. “When our second phase is complete in 2020, we will be able to accommodate 80,000 people.”

SmartCity Kochi and the two phases of Infopark means one corridor spread over 500 acres dedicated for the IT industry.  “When these projects are complete, we will have about 2 lakh professionals working from here,” Mr Nair said.

“We are anticipating the pressure on the infrastructure. With the second phase of Kochi Metro touching Infopark, one of the major problems will be solved. We have also taken measures to ensure that we have adequate supply of power and water.”

And let’s go back to KEPIP, which was thirsting for investments. It’s now bursting at its seams, having hosted several companies making huge investments and exporting to global markets.

And that explains the impact Infopark has had on the economy of Kerala. 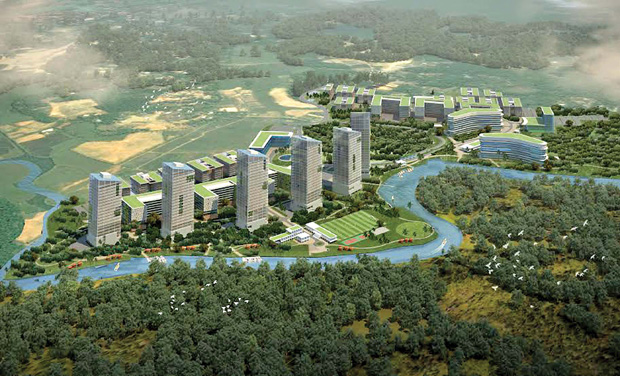