Surfer gets taste of shark tooth on Australian beach

Surfer Kirra-Belle Olsson being treated in a hospital after a shark bit her (Photo: Facebook)

Sydney: A teenage girl on Friday described her shock after being bitten by a shark when she landed on top of it while surfing off a popular Australian beach. Kirra-Belle Olsson, 13, was on her board off Avoca Beach, 95 kilometres (59 miles) north of Sydney, early Friday when the shark grabbed her left leg.

"She'd fallen off her board and she felt something grabbing her leg," said Surf Life Saving New South Wales spokeswoman Donna Wishart. "She made her own way back to shore, and then other surfers and people on the beach have assisted her and they put her in a car and drove her to the hospital."

This is the photo of her deep cut on the leg 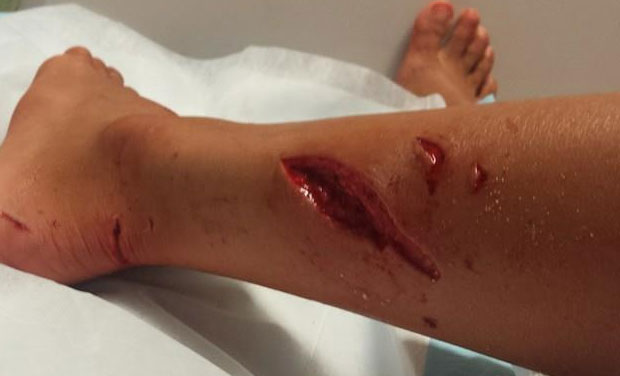 Olsson said she had "dropped in" on the shark, a surfing term for taking someone else's wave, and it bit her foot and calf three times.

"I paddled in just like in shock, just started laughing. I was like, 'Whoa, what the hell, I just got bitten by a shark, oh my God'," she said. "And then I got halfway carried up the beach  telling my friend Saxon, 'take photos, take photos'."

Local media said she was treated for deep cuts to her leg and was due to undergo surgery on Friday. The attack came less than a week after some Western Australia beaches were closed following a suspected shark attack on a inflatable boat, although no one was hurt.

Experts say attacks by sharks, which are common in Australian waters, are increasing as water sports become more popular. Earlier this month, two great white sharks were killed after a young surfer lost parts of both arms in an attack off the south coast of Western Australia.

The most recent fatality was last month, when a man was killed in front of his wife while swimming at Byron Bay on Australia's east coast.

Here's a video describing what happened

It's Aston Martin for Sebastian Vettel in 2021