Villagers show bullet marks on the wall of a house after a firing from Pakistan side in Devigarh village at the India-Pakistan International border at Arnia sector in Jammu (Photo: PTI)

Arnia/Jammu: Five villagers were killed and 29 injured in heavy mortar shelling and firing by Pakistani troops targeting hamlets and outposts along the International Border in Jammu district on Monday in one of the worst ceasefire violations.

They used small, automatic weapons and mortar bombs to target the border hamlets and BoPs along the borderline. BSF troops guarding the borderline retaliated effectively and gave a befitting reply, he said, adding that the intermittent firing exchanges are going on in the area.

Twenty-five of the injured have been shifted to GMC hospital Jammu.

A large number of houses were damaged and livestock perished in the firing and shelling, said Mr. Singh, who was leading a team of police personnel who risked their lives to shift the injured people to hospital during the heavy shelling. 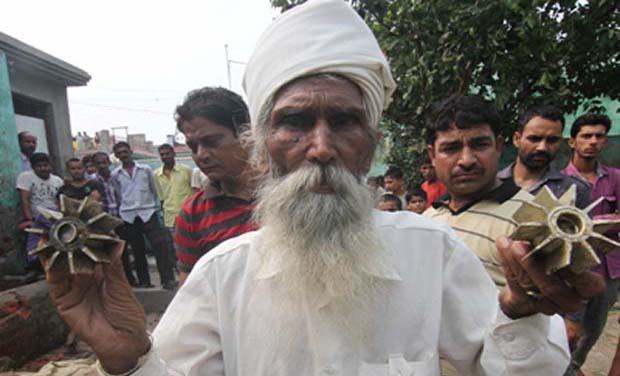 A villager shows mortar shells allegedly fired from the Pakistan side in Chanana village at the India-Pakistan International border at Arnia sector in Jammu and Kashmir (Photo: PTI)

“People living in critical zones along the border will be evacuated,” he said

A BSF spokesman said that the force did not suffer any casualty.

On October 3, Pakistani troops and rangers violated ceasefire in Gulamarg sector of Kashmir Valley and in Poonch and Jammu sectors in which a girl was killed and six persons were injured.

Fear was writ large of the faces of kin of the injured, who were shifted to the hospital here. “We thought we will die any time, such was the firing of mortar bombs and their bursting sound,” Karan Singh of Pindi village said.

“We have become sitting ducks for Pakistan to target us. 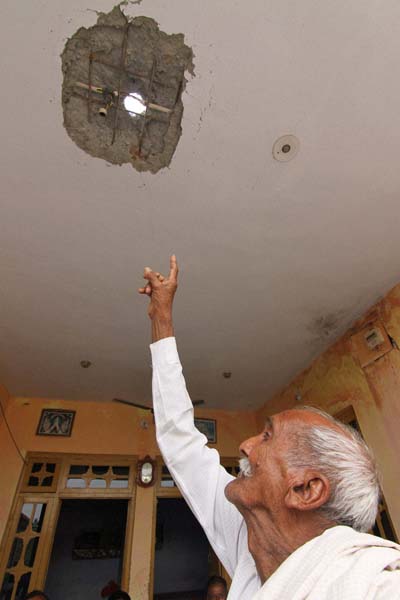 A villager shows the roof of his house damaged after a firing from Pakistan side in Devigarh village at Arnia sector in Jammu (Photo: PTI)

Government should do something immediately. We cannot live on the border to die,” Rano Devi said.

Yesterday, Pakistani troops violated ceasefire by resorting to unprovoked and heavy firing on Indian forward posts along LoC in Balnoie sub-sector of Poonch district around 0800 hours.

On October 4, Pakistani troops resorted heaviest firing and mortar shelling along LoC in in Poonch district of Jammu and Kashmir, drawing retaliation from Army.

On October 1 and 2, Pakistani troops violated ceasefire two times along LoC in Poonch district resulting in injuries to six people, including three women.

Read: Over 200 evacuated from firing-affected hamlets in Jammu

With assembly elections due in Jammu and Kashmir, the Pakistan-based militant leadership is desperate to push in a large number of militants into the Indian side in the cover of the heavy firing to carry out terrorism related activities, according to the Army.

“They want to disrupt the assembly elections in the state as they know that a large number of their cadre has already been eliminated. So to reinforce their numbers, they are desperately trying to infiltrate more people into the state and that is why there has been an increase in the number of ceasefire violations,” Udhampur-based defense spokesman Col SD Goswami had said.

Before this, the heaviest ceasefire violation by the Pakistani troops was witnessed on August 26 night.

In a bid to defuse border tension, triggered by firing and shelling by Pakistani troops stretching to 45 days, the heaviest since 1971 war, India and Pakistan on August 29 held a crucial Sector Commander (DIG-Brigadier) level flag meeting on Octerio BoP in Jammu district’s R S Pura sector. 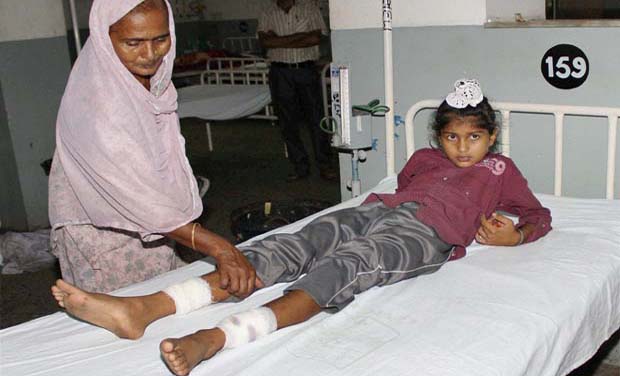 An injured is treated at the Government Medical College and Hospital in Jammu on Saturday after heavy firing by the Pakistan Rangers in Pittal and Tent Guard border posts at Arnia sector (Photo: PTI)

Three terrorists were killed as army foiled an infiltration bid along Line of Control (LoC) in Tangdhar sector of Jammu and Kashmir.

"There was movement of a group of militants entering Indian side along LoC in Tangdhar belt of North Kashmir during the intervening night of October 5 and 6. They were challenged by Army troops," a senior Army officer said.

In the ensuing gun-battle, three terrorists were killed, he said, adding that the infiltration bid was foiled.

Three AK rifles were seized from the site, he said.

Real estate may not gain from bullish I.T. biz