Botany professor G. Narender Babu has pointed out that flowers and leaves used for preparing idols of Bathukamma could prevent water-borne diseases as they possess various medicinal properties.

Karimnagar: Botany professor G. Narender Babu has pointed out that flowers and leaves used for preparing idols of Bathukamma could prevent water-borne diseases as they possess various medicinal properties.

Speaking to DC, Mr Narender Babu explained how the flowers and leaves could be beneficial once the idols are immersed in a tank or pond. 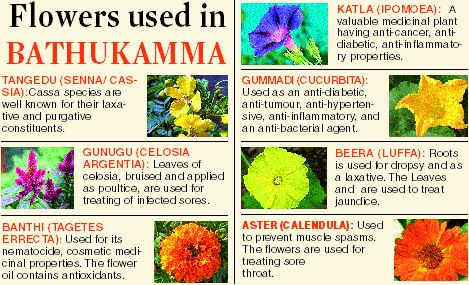 “The thangedu, gunugu and katla flowers produce many alkaloids with antibiotic properties. Similarly, a dense layer of white and fine glandular hairs growing on the leaves of pumpkin and ribbed gourd synthesise antibiotic chemicals. Many studies have found that these chemicals are capable of killing pathogenic bacteria, fungi and viruses that cause various diseases in human beings,” he said.

When several hundreds of idols are immersed in a tank or pond during the festival, these chemicals dissolve in the water, leading to death of the bacteria, fungi and viruses.

Thus, water-borne diseases such as typhoid, cholera, diarrhoea, pneumonia and tuberculosis (TB) can be prevented. Some respiratory and skin diseases can also be checked when water does not contain fungi. Generally, these diseases increase due to presence of various types of micro-organisms such as the bacteria, fungi and viruses in the water bodies.

In order to prevent diseases, our forefathers introduced a custom among people of Telangana in the form of Bathukamma festival, he stated.

With no promotions, 2009 batch SIs losing seniority and career benefits

Police bust gang for cheating via students' US varsity fee