After Tamil Nadu Chief Minister Jayalalithaa’s conviction, who will take over next?

There are remote chances of the AIADMK leader leaving for Tamil Nadu in the custody of police officers of that state. (File photo: PTI)

Bengaluru: The much-awaited verdict in the case of disproportionate assets against Tamil Nadu J. Jayalalithaa was pronounced by a special court in Bengaluru on Saturday.

The next step involves finding a replacement for Jayalalithaa even as the names of her cabinet colleagues O Panneerselvam (Finance), Natham Viswanathan (Electricity) and V Senthil Balaji (Transport) and former Chief Secretary and Consultant to state government Sheela Balakrishnan are doing the rounds for the post.

Jayalalithaa had met senior minister O. Panneerselvam twice during the breaks in the court proceedings, when she could have conveyed her choice of successor. 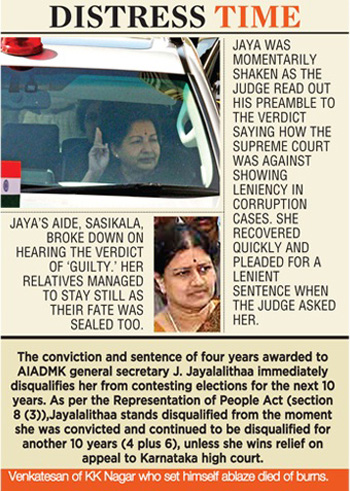 Reliable sources told Deccan Chronicle that judge Michael D’Cunha found the Chief Minister guilty of corruption and sentenced her to four years in prison along with three others. While Jayalalithaa has been fined a whopping Rs. 100 crores, the three other accused have been slapped a fine of Rs. 10 crores each.

Sources said soon after the judge completes announcement of his verdict, she would be taken to the central prison located a few hundred feet away from where the special court which heard the case. There are remote chances of the AIADMK leader leaving for Tamil Nadu in the custody of police officers of that state.

A large posse of policemen deployed near the central prison, on the outskirts of Bengaluru, caned scores of AIADMK workers who tried to break the security cordon and rush towards the special court in the morning.

Tension was palpable on Karnataka’s border with Tamil Nadu with some AIADMK workers trying to set fire to vehicles at Athibele, a village on the state’s border with that state, soon after announcement of the judgement.

AP to have not 25 but 26 districts by next year