Karthi and Catherine Tresa in a still from the film.

Most have come across this well formed cliché, usually the case when the author has no clue of what he (or she) is talking about: that reality is either chiaroscuro (black and white) with firmly drawn borders on ethics, morality, and ways of conducting life, or to counteract this point, that reality is instead ‘differing shades of grey’. What one could instead propose is that the heat produced by these differing hues is the source of light, and that a clear picture of life in north Madras doesn’t occur without a certain amount of mental combat and disputation. Ranjith’s Madras succeeds in portraying the oft-preconceived areas of North Madras for what it actually is. And he does this without losing a definite sense of flair and affectation. Be prepared: if you are expecting a grimy, rundown, lawless state of affairs, this movie might feel like as though an unsuspecting bombshell had gone off above your eyebrows, flipping the architecture of your mind upside down. If you hadn’t had such expectations, well, it may still end up doing such a thing.

Now that you’ve been warned, picture, if you will, north Madras: the schisms in the populace due to endless quarrels, and the air of fear and propaganda that ensues in the splitting of a decisive political party named Makkal Munnetra Kazhagam.  Picture further, a gigantic ‘wall’ that had once been a symbol of unity, now instead turns into a witness for the senseless violence that ensues over its control between the two factions. One needs also to remember that, especially in Dravidian politics, wall writings and posters are a way of purporting one’s own ideology and thus having control over one of the biggest sources of deceit and propaganda. Nonetheless, amongst the midst of such pointless tedium is the director’s quest to actually find a point: that majority of the people in most places are often peaceful and have day-to-day interactions that are meaningful and propitious. Thus amongst this apparent squalor, we have Kaali (Karthi) - the quiet software engineer, adolescent cyclists who are deeply interested in politics, Johnny (Hari) whose history of thuggery has eventually taken a toll on his mind, Anbu (Kalaiarasan), Kaali’s friend  and Kalairani (Catherine Tresa) who is Kaali’s romantic interest. They too are eventually pulled into this squabble, but what works for Madras is a strong sense of verisimilitude.

Madras has a strong storyline and a powerful cast to back this up. The major success of the movie is attributed to the perfect casting handpicked by Ranjith and extracting the best from them. Karthi has proved that he is an actor of substance, given an author backed role. Playing an educated youth from North Madras, he exudes the déclassé nature be it his body language or his diction required for such a role. His romance with Catherine is quite charming and adds a dash of colour to, on the whole, a gritty film. New girl Catherine is quite adequate in her role. Kalaiarasan convincingly portrays the nature of friendships, and he has an equally alluring romance with his wife, Ritvika, who plays Mary. The enthralling feel that the first half creates is slightly missing post interval portions.

Other departments such as the music especially BGM by Santhosh Narayanan, brilliant cinematography by Murali , racy editing by Praveen rise to the occasion. On the whole, Madras promises to captive futures audiences with its sublime mix of love, poverty, and war. A not to be missed film! 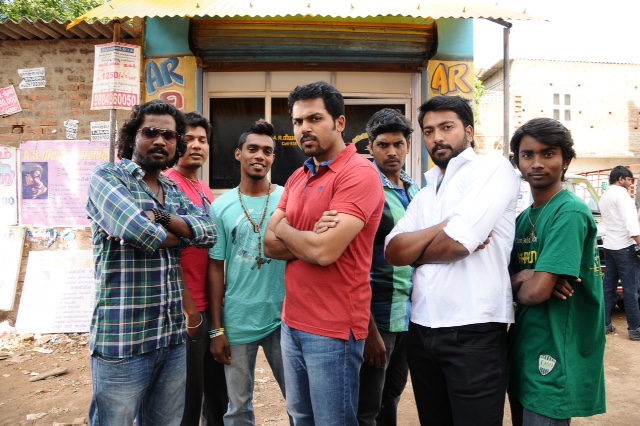