ISRO scientists and other officials celebrate the success of Mars Orbiter Mission at MARS Orbiter Command Network complex in Bengaluru on Wednesday. (Photo: PTI)
Bengaluru: It was 7.58 am. Prime Minister Narendra Modi was beginning to look anxious and had moved to the edge of his seat. It was then, a full 40 minutes after Isro scientists nudged Mangalyaan into Mars’ orbit, that Isro chairman K. Radhakrishnan got the call he was waiting for.
Read: India becomes first country in world to place spacecraft in Mars' orbit in first attempt 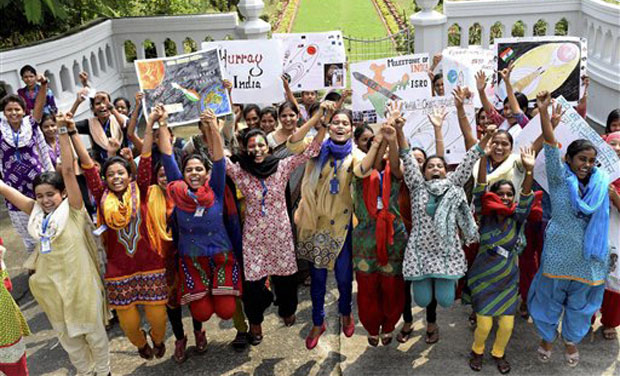 The 8 am call, that cemented the place of every Indian space scientist in the sun, said Mangalyaan had emerged from the “dark side of Mars” and was finally circling the red planet, 224 million km away from Earth.
Also Read: After scripting space history, Mangalyaan starts clicking images from Mars
As the core team of scientists and engineers burst into high fives, thumbs-up, “V” signs and lusty cheers inside the Mission Operations Complex at Isro’s Telemetry, Tracking and Command Network facility in Bengaluru, an elated Mr Modi patted the Isro chairman and complimented Indian space scientists for making history. Even as their junior counterparts were unable to contain their exuberance,  the PM said this was a bigger than any cricket victory.
...
Tags: isro, current affairs, mars orbiter mission

Annual cleanliness survey is out - Check how your city is ranked