A tough politician, a proud Telangana bidda, a caring daughter and a loving mother, TRS MP Kalvakuntla Kavitha has more to her than meets the eye. Calling herself a pampered “Papa ki Beti”, during a chat with the Deccan Chronicle, she reinstated that politics is not a part-time profession.

K. Chandrasekhar Rao, the Chief Minister and the father
He is the most wonderful person in the world. He is very jovial, unlike what is portrayed, and he is also very easy going, calm and cool. He doesn’t directly praise, like typical, orthodox fathers, but puts it in such a weird way that I don’t know if he is praising me or not. I get away with a lot of things and sometimes as a kid, I used to even cover up for my brother’s mischief. My dad is a very adamant person and he will do what he thinks is right. He has proved himself beyond a point. I am an ardent ‘Papa ki Beti’ and will always argue with people on how he is right. I believe in him and will stand by him. One should be a Hitler sometimes to get things done. I think the strict approach is required as the system is messed up.

Being a CM’s daughter
Being a CM’s daughter has more disadvantages than advantages. All this while, not many people knew me. And now suddenly, so many approach me and talk to me. I wonder where all these people were. The scariest part is that I don’t know if the person talking to me is even serious. But I am strict and serious and will stick with people who were with me in my bad times. There are no advantages at all. 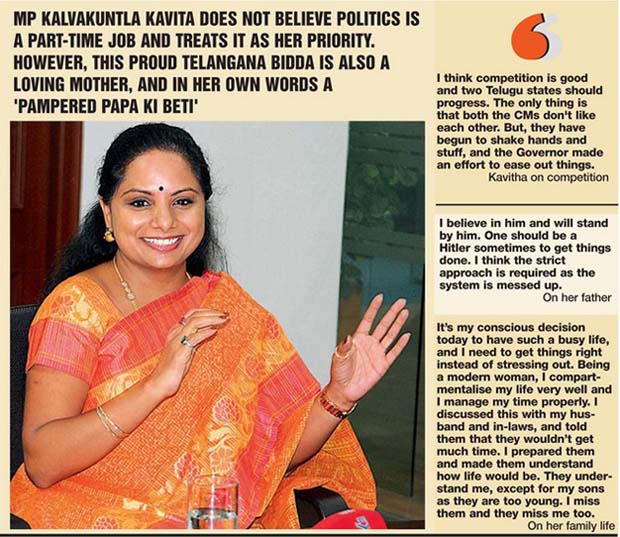 Juggling politics and family
It’s my conscious decision today to have such a busy life, and I need to get things right instead of stressing out. Being a modern woman, I compartmentalise my life very well and I manage my time properly. I discussed this with my husband and in-laws, and told them that they wouldn’t get much time. I prepared them and made them understand how life would be. They understand me, except for my sons as they are too young. I miss them and they miss me too. I try to make up as much as possible and sometimes I spoil them. I feel guilty when I am away, but I sit with them and make them understand about my work. When they understand and respect your work, life becomes easier. I am already dealing with three boys, including my husband. It is amazing as I go home and my younger son addresses me in the Telangana slang, and I forget all my tensions. It feels like heaven.

Politics — the family business
All of us breathe, eat and drink politics. We always disagree with each other’s views. I am the one who is very vocal and we have arguments like every parent and child. Sometimes, my dad tells me I don’t know stuff and I go like: “Yeah, right.”

One day as the CM
If I was the chief minister for one day, I would appoint a woman inspector in every centre and also appoint more women police officials overall. It is very sad that no matter what happens, nothing is done for women. Women politicians, after coming to power, don’t do anything for women. I have consciously refrained from making a few comments, as I am seen as an overall leader and not just a woman leader.

Advice to young girls in politics
Do your homework whenever you get into a party, otherwise people will take you for a ride. When you know you have your stuff right and when you make sense, people will shut up. Many don’t do their homework and don’t speak sense. They blame politicians and say that we don’t give them a chance. We run a party and it is difficult to find hardworking people. Many are part-time politicians with one leg in business and one leg in politics. I have seen my father who has been through good, bad and rough patches in life. But he never did any business except politics and only drew salary as an MLA. I quit business and came into politics. My dad’s experience helps me, but if you don’t perform, people will vote you out.

Choosing Centre over the state
Centre is better in a way as you can give your inputs for policy making, whereas state is more of implementation. Parlia-ment offers wider spectrum of issues to work on and I don’t want to restrict myself only to Telangana. Though development of Telangana is my ultimate goal, I want to work on other issues as well.
There are a lot of friends. Supriya Sule, Anupriya Patil and many senior BJP MPs come up to me and tell me that I am very active and I speak up. My oratory skills are a result of my hard work. After becoming an MP, I consciously rehearse and tweak my speech. I am on record and I must be careful. I have always wanted
to be a Parliamentarian.

Pawan Kalyan
“There have been many allegations. However, do we see Pawan Kalyan anymore? He has always been the “make-up and pack-up” guy. He comes before elections with little make-up, does his act and goes off. But, we have been with people and will remain with them. I have always been clear with my taxes, and I want to go international with my organisation. I want to remain transparent. I do not believe in any shady businesses or in raising funds from the film industry.

The household survey
There was a lot of negative propaganda about the survey. I believe the opponents could not counter the survey properly. It was done to find out how to roll out subsidies. The survey was a success. There were four lakh houses without any recognition and the GHMC did not even know about them.

The nativity clause
There is definitely a need for our people. There are many laws in various states which have local, district, zonal reservations for local people and I believe there is nothing wrong in calling locals ‘our people.’ We called them ‘our people’ back then also because we were projecting and advocating the cause of a separate statehood and people misunderstood it. As CM, he spoke for all people in Telangana.

TV channel ban
When we were in the movement, it was a different story, but now he is the CM. His language and that of the poet Kaloji are very similar and he was relating the two. People who didn’t know about it took it in a negative light. Though his stand was right, I believe that a milder version would have been effective.

Regularisation of contract employees
It was mentioned in the manifestoes of the previous governments as well and this negative propaganda is being promoted by opposition parties. We will stand by it and we will regularise it. BJP, Congress and TD students are protesting against this. These contract employees have been working for 12 years in the government. The core issue of the Telangana movement was jobs and our jobs have been taken away. If I have to make sure our people get jobs, I have to be sure of the nativity clause.

Competition between the states
“I think competition is good and two Telugu states should progress. The only thing is that both the CMs don’t like each other. But, they have begun to shake hands and stuff, and the Governor made an effort to ease out things. In the memorandum they gave to the Group of Ministers, I had said that more projects between TS and AP that will help both states get along. There will be some unhealthy tension for a few years, but we will try our best to put them off. Many negative elements are adding to this. We have never targeted Andhra people, we have targeted Andhra politicians and we will continue to do so. If they advocate against projects coming to Telangana, why would we be quite.

On Nizam’s Jewels and renaming KBR Park
“K. Chandrasekhar Rao garu was very interested in bringing the Nizam’s jewels back to Hyderabad. I had a meeting with Princess Esra, and we will try to bring them back for an exhibition if not permanently. She had many issues as well and we will work on them.
During the Telangana movement, we had said that we will rename the KBR park as Asif Jahi Park, but Esra suggested that it should be Mukkaram Jah park as the prince was brought up there and he maintains the Chiran Palace. The government has not taken a decision on it.”

Hyderabad Liberation Day
“There has always been controversy around it. My father was always away from this and now the government needs to unite everyone in Telangana. It has to make conscious decisions and we don’t want to fall prey to emotions. People who were part of the struggle must be recognised and the martyrs and their families shouls be respected and taken care of. This should not be used for any kind of divisive politics.”

The 2024 Olympic dream
KCR wants to host the Olympics in Hyderabad in 2024. This has to be done in cooperation with the Centre on behalf of India. The Centre has to bid for the Olympics and we must ensure we fulfil the basic criteria. The ORR and surrounding areas must be developed in such a way that any player will reach the stadium in 40 minutes. We have to create sports centres or hostels and even infrastructure at the stadium.

Engineering colleges
The decision to not give permission to engineering colleges was taken because many students became autorickshaw drivers. Not many have infrastructure the and they took permission for 100 courses. The decision is very right and they cannot complain as the quality of education is important. The KG to PG scheme will give the much needed impetus. Give us two to three years and we will make sure everything is in place.

Old city
The Chief Minister hoisted the flag at Golconda and many people who were uninvited came. They were happy. Many Andhra Pradesh people said Hitec City was Hyderabad and we laughed. Half of Hitec City is empty, but Charminar and Golconda are symbols of Hyderabad. Old city infrastructure is our priority.