Bolt and the beautiful

Usain Bolt poses with his fast car which is customised for Bolt, even the mechanics are reportedly engineered to his speed.
Hyderabad: He runs with his shoe laces untied, defeats Yuvraj Singh at his own game with a blitzkrieg 45 of 19 balls and jogs to the finish line at a world championship, because he knows he’ll win. What is most striking about the fastest man who has ever lived is undoubtedly, his confidence. And the only reason behind it? “Winning,” says Usain Bolt, striking his archer-like victory pose on defeating Yuvi at Puma’s Faster Forever World Tour, that was held in Bengaluru recently.
Insisting that they play the “friendly” tennis ball match with a leather ball, Usain has always had fond memories of the cricket. “It is a sport I have watched a lot with my dad. As the cricket matches were aired at odd hours back home in Jamaica, he used to come to my room and wake me up so we could watch the match,” recollects Usain, an ardent fan of Sachin Tendulkar and a promising fast bowler, before he channellised his energies on to the track.
Standing at six feet and five inches, the well-built sprinter resembles one of his favourite sportspersons and big buddy, Chris Gayle. He rises at 6.30 am to train, to build muscles, sharpen his starts, all to win. But he also finds time to play Dominoes with his friends late into the night with scramble eggs for breakfast and speeding around in his Nissan GT-R. He stays glued to Call of Duty: Black Ops, something which he swears he’s good at. If you didn’t know better, you’d think it’s always been a game or two for this man. 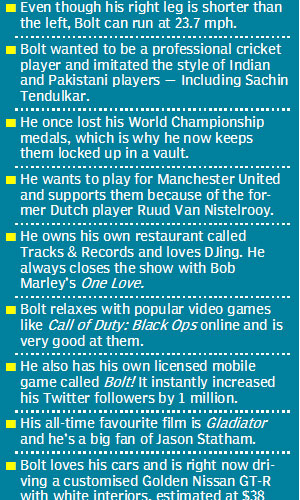 “Post Rio, I will have one more season, after which I want to travel and definitely try my hand at football,” says the ardent Manchester United supporter. Diagnosed for hyperactivity as a kid, the Jamaican sprinter’s best memory is not something that created a record. “The greatest race for me was when I was 15, in front of my home crowd in Jamaica, and winning it,” he says on ‘jumping’ his way to a medal. But for him, everything from Chinese food to the track and field is a “weird sport.” “So many guys are coming up. It’s hard to pick any one person, but my coach picks Justin Gatlin, Tyson Gay and Yohan Blake. But I am not going to let anybody beat me,” he states firmly.
His only goal before the 2008 Beijing Olympics was to be a legend. Bagging the world 100 m and 200 m titles, the world believed him when he said, ‘I am a legend now.’ This confidence can easily be mistaken for arrogance. Ask him what it takes to be invincible and he simply shrugs, “There is no substitute for hard work. As an athlete, I have seen records come and go. They have always been broken but if you want to be as great as me, you have to work very hard and I work the hardest. That’s why my records will stand the test of time.”
When he isn’t winking a “come and get me” at the cameras, or munching on his chicken nuggets before a big race, he hops behind the DJ’s deck to spin some wicked tunes. “I have always been into music and love dancing. I go to a lot of clubs and enjoy myself and take over the console at times. It depends on my mood really,” he says. But right now, the fastest man alive is on another mission. Apart from wanting to be remembered for his rock-hard abs, “The 200m Sub 19 is the greatest challenge for me and I intend on breaking it.” And we are sure the Bolt from the blue will do it!
...
Tags: offbeat, lifestyle, sunday chronicle, usain bolt