Hyderabad: It’s finally official. Vijayawada has won the race and the new capital of Andhra Pradesh will be located around the city. Chief Minister N. Chandrababu Naidu, announced the decision in the Assembly on Thursday and the House passed a resolution approving the same.

It will be a centralised capital with all the government offices including Assembly, secretariat, chief minister’s office, directorates and commissionerates located in the capital region and not in different districts.

“The state Cabinet had met on September 1 and resolved to locate the capital city in a central part of the state, around Vijayawada,” Mr Naidu told the Assembly on Thursday.

A world-class capital city will be built involving the people so that it can proudly be called a “People’s Capital”, he said. 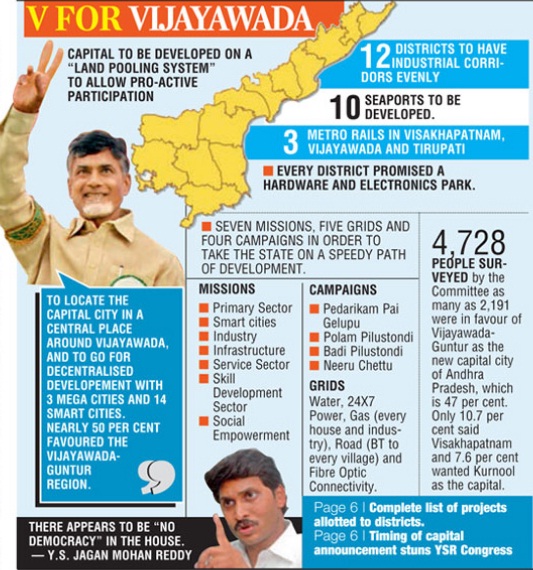 The official announcement indicates that the government has junked the Sivaramakrishnan Committee’s report on the capital that was not in favour of the Vijayawada-Guntur area.

Mr Naidu said that the Cabinet sub-committee would work out the modalities under “land pooling system” for acquisition of land to build the capital city. It is a successful model and provides scope for a win-win situation for land owners and the government, he added.

“We believe that this will enable the local land holders to proactively participate and benefit from the development of the capital city,” he said.

Stating that creation of a world-class capital city at a central location was essential to create a level playing field for the new state, the Chief Minister said a vibrant capital city could act as a catalyst for economic development for the entire state and become an iconic city that would be a source of pride to its citizens. Though Mr Naidu neither specified the extent of land the government was looking at for the new capital nor did he mention money involved in the development.