Carpooling: Judges, advocates get on board

Picture for representational purpose
Bengaluru: To beat the ever increasing fuel prices, traffic congestion and parking woes, carpooling is catching up among advocates, judges and other members of the judiciary. Factors such as same work destinations, standard timings and in some cases even same locality of residence have added to the popularity of the concept among the men in black robes.  According to several advocates practicing in city civil and magistrate courts, it is more popular among the lower court judges, who reside in official quarters located in the same locality.
Though the judges are provided with state owned cars and vans for their daily commute to the courts, most of them are using their own private cars and carpooling amongst themselves.“The cars and vans provided by the state government for the transportation of lower court judges are outdated and in bad condition. This is one of the main reasons why judges prefer to carpool using their own private vehicles,” said another advocate practicing in city civil court. Moreover, with many advocates owning cars, finding a parking space for a four-wheeler in lower courts has become a major challenge.
Initially when car pooling was introduced in the city, the early adherents were IT professionals and residents of high-rise apartments. But the concept drew a lukewarm response with many users, who had registered themselves on popular sites facilitating carpooling, participating very less on a daily basis. However with rising fuel prices and vehicle maintenance costs, the number of active users has gone up.
Let’s pool in - an initiative which was earlier launched to de-congest traffic on city roads, in association with Bangalore Traffic Police, has seen a steady increase in its membership and currently there are 26,959 active users. 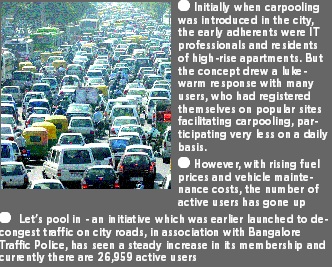