Related Stories
Sports, In Other News

Chief Minister KCR applauds as shooter Gagan Narang steps up to receive his cash award on Friday.
Hyderabad: Sporting achievers Saina Nehwal, Gagan Narang, Parupalli Kashyap, P.V. Sindhu, RMV Gurusaidutt and Jwala Gutta were among the 10 athletes felicitated by the state government, which also presented them with cash awards worth Rs 6.11 crore during the Independence Day function held at the Golconda fort here on Friday. Badminton coaches Pullela Gopichand and Mohammed Arif too were rewarded for shaping up champions. 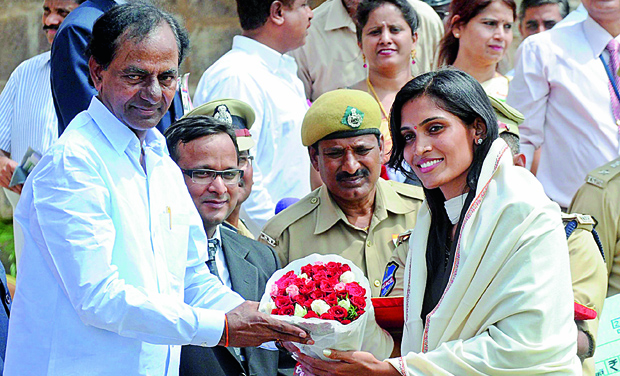 kabaddi player Mamtha Poojari are all smiles after receiving their cash awards — P. Surendra
Chief Minister K. Chandrasekhar Rao was at his cheerful best when the sportspersons walked up to accept the cash rewards. He raised his arms and clapped when shooter Gagan Narang stood in front of him. Mr Rao also shook his fist, a la boxer, to leave woman boxer Nikhat Zareen gushing as she collected the prize. Shooter Gagan Narang was the biggest gainer, collecting Rs85 lakh (Rs 50 lakh for the Olympic bronze medal, Rs 25 lakh for the 2014 Commonwealth Games silver and Rs10 lakh for the 2014 Commonwealth Games bronze) for his on-field performances. 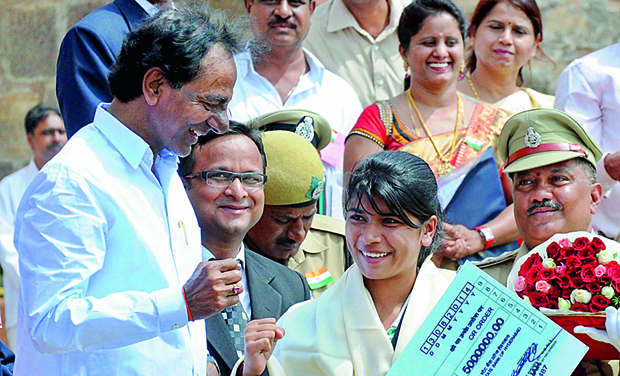 Chief Minister K. Chandrasekhar Rao shakes his fist as he hands a cheque for Rs 50 lakh to woman boxer Nikhat Zareen in Hyderabad on Friday. — P. Surendra
Shuttler Kashyap was the next best, taking home Rs 75 lakh — 50 lakh for the CWG gold and 25 lakh for making the men’s singles quarterfinals at the 2012 London Olympics. Sania Nehwal tallied Rs 70 lakh (50 for the 2012 Olympics bronze and 20 for winning the Australian Open Series). Woman boxer Nikhat Zareen was given `50 lakh for her gold at the World Youth Boxing championship in 2010. 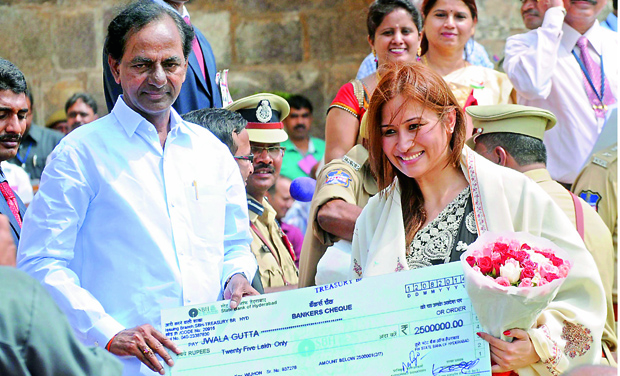 Hyderabad set for Formula E debut on February 11 next year