Kochi: In a shocking revelation, a survey has found that at least 15 school students, including four girls, consumed alcohol on a daily basis in the three districts of Kottayam, Idukki and Ernakulam. The survey was conducted by the Centre for Gandhian Studies of Alphonso College, Pala, in association with Alcohol and Drug Addicts Research, Rehabilitation and Treatment Centre, a non-governmental organisation.

The survey covering 3,460 students in 20 schools of the three districts was conducted in the academic year 2013-14, Dr Teresa Joseph, director of the Gandhian Studies, told DC on Saturday. The survey consisted of 25 questions and the age group of students who took part in the survey was 15-20.

“An analysis of the trend in alcohol consumption shows that 46 per cent of 399 students, who included 210 girls, continued to consume alcohol. Among the total respondents, 15 students consume alcohol daily, 15 do so once in a week, 23 consume twice or thrice in a week and 21 consume alcohol once or twice in a month.”

The specific statistics for girl students reveals that four students consume alcohol daily, seven once in a week, 16 twice or thrice in a week, eight once or twice in a month and 175 occasionally.

Nearly 90 per cent of the respondents belong to nuclear families and 68 per cent of them were Christians and 30 per cent Hindus. An analysis of the survey shows that 864 students (24 per cent), who included  440 girls, had consumed alcohol at least once and six per cent of them had tried drugs and tobacco products.

According to the survey, 31 per cent of the respondents took their first drink between the ages of 5 and 10 and 40 per cent of them tasted liquor for the first time on account of anxiety. Only 24 per cent of respondents hit the bottle for the pleasure of it while only 8.45 per cent accounted for peer pressure. 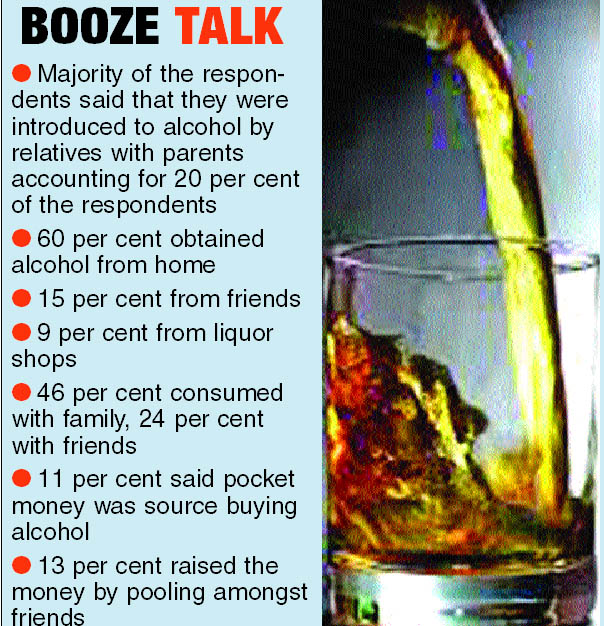