File picture of kerala international film festival. (photo: DC/file)
Alappuzha: A five-member panel headed by veteran film director Adoor Gopalakrishnan, set up by the Government, to revise the guidelines for subsidy given to films and conducting the annual International Film Festival of Kerala (IFFK), has decided  to deny subsidy to Malayalam films with  absurd English titles sparking off a row.
The panel, which was declared by the Chief Minister, Oommen Chandy, on May 10 this year, is currently preparing the report that is expected to be tabled next week. The recommendation body’s observation comes following a Deccan Chronicle report titled “Now, Malayalam films speak English”, that appeared on June 22 last, on the heels of the formation of Adoor Committee. The study panel observed to draw a lakshman rekha in the rampant use of mismatched English sentences, as film titles, after evaluating the ballooning English title trend, in the Mollywood.
Expressing deep displeasure over the panel’s observation, Dr Biju, national award winning film director, has come out with a FB campaign on the issue, grabbing several eyeballs. The disgruntled director told Deccan Chronicle that a film should be recognised on the basis of its aesthetics, unlike the language that is used to title the movie. 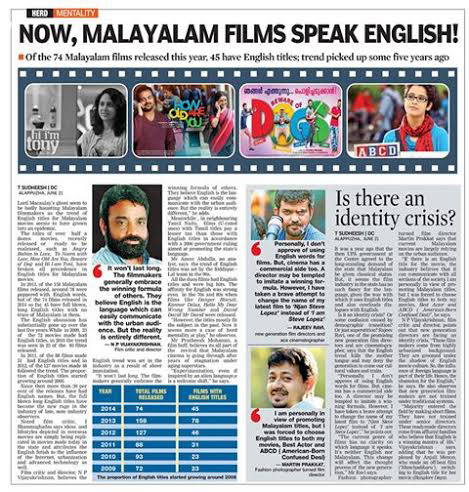 “Denying subsidy over the language of titles is completely uncalled for and deplorable. Such type of recommendations will only help discredit the sanctity of a classic language with atrocious Malayalam titles like Peruchazhi and Koothara. It will also create an environment to use any senseless words to title with the intent of making sure of the Government subsidy”, he claimed.
Meanwhile, Pandalam Sudhakaran, a member of the panel, does not subscribe to his view at all. “We came to the conclusion in this regard after vetting hundreds of responses, irrespective of offline or online. The majority of respondents wanted appropriate solution to the burgeoning obsession to make English sentences as titles. We do agree with English titles like ‘Classmates and Traffic, but we can’t allow horrible titles such as “Hi I am Toney, Beware of Dog, God’s own Country and Mr Fraud.” The panel doesn’t stand by a notion to deny subsidy to all English titled movies, but to senseless full-blown English titles. So there is no question of ‘Freedom of Expression either,’ he reiterated.
The data put out by DC on its June 22 report had shown that out of the 74 films that have released this year so far, 45 have English titles, and many of them are full- blown English sentences. In 2013, out of the 158 Malayalam movies that were released, about 78 had English titles, and most of them were crisp.
The English obsession has substantially gone up to over 60 per cent for the last five years. In 2012, of 127 movies, 46 were English titles, while in 2011, 31 films were released with English titles out of 88. In 2010, 93 films were released in which 25 had English titles and it was 23 out of 72 movies in 2009.
N P Vijayakrishnan, noted film critic and director, also is in a view of curbing the unnecessary English affair, in making titles of Malayalam movies. “It’s a good idea to implement the subsidy system to Malayalam titles. The film makers should explore the feasibilities of the mother tongue and its literature. It’s easy to make English titles, but making meaningful Malayalam titles requires back up of extensive reading. The system of subsidy is being followed by Tamil Nadu, where films (U-rated ones) with Tamil titles have to pay less tax than those with English titles in accordance with a 2006 Government ruling aiming to promote the State language. However, I don’t think the titling with English language should completely be wiped out. If an English word is apt to the theme of the movie, it’s preferable,” he said.
The veteran film critic, MF Thomas, also said nobody can resist filmmakers from titling films with English words. “Despite being classical language, Malayalam word will not be applicable to the theme of certain films. For instance, a Malayalam movie title “Twinkle, Twinkle Little Star” has no substitute in the Malayalam language,” he argued.
Mr Anver Abdulla, a film industry analyst and novelist, said this affinity for English was strong even before in the 70s and 80s. “Danger Biscuit, Kannur Delux, Hello My Dear Wrong number and David David Mr David are some notable examples. We can’t afford weird titles not only from English language, but also from other alien languages. For instance, Naku Penta Naku Taka is the most bizarre title the Malayalam film industry has ever heard. It’s high time to draw line of control for such type of absurdity in the name of the movies, the most popular communication medium on the planet”, he recalled.
Though the controversy over the titles looms large, Adoor Gopalakrishnan, the Chairman of the panel, remained silent. Responding to the DC query, he said that there were several views out here. “Being head of the panel, I am not in a position to divulge into the matter as that would adversely affect the moral of the committee. We have decided to submit the report in a week. Then we will explain the findings of the panel to the public,” he said.
...
Tags: mollywood, international film festival of kerala, entertainment