Mumbai: Seeking attention from his wife, a frustrated man prepared an excel sheet of excuses his wife made turning him down for sex, according to the Daily Mail.

The excuses included replies such as included 'I'm exhausted', 'I need a shower (didn't shower)', 'I'm trying to watch the movie (fell asleep 15 mins later)' and 'I'm not feeling too well'.

In a bid to gain attention from his wife’s otherwise busy schedule, the man emailed the spreadsheet, which later went viral on social media. 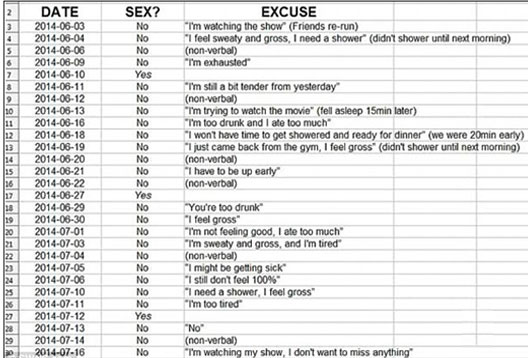 The sexually-frustrated husband had noted down all the responses and compiled it on a spreadsheet. He then emailed it to her while she was away on a 10-day business trip.

Annoyed and shocked at the email, the woman tried connecting with her husband but in vain. She then turned to Reddit to share the ‘harshness’ and ‘insensitivity’ by her husband.

She wrote: 'Yesterday morning, while in a taxi on the way to the airport, husband sends a message to my work email which is connected to my phone.

'He's never done this, we always communicate in person or by text. I open it up, and it's a sarcastic diatribe basically saying he won't miss me for the 10 days I'm gone.

'Attached is a SPREADSHEET of all the times he has tried to initiate sex since June 1, with a column for my "excuses", using verbatim quotes of why I didn't feel like having sex at that very moment.'

However, the spreadsheet, which quickly went viral, was later removed.

Respect time, do not keep the other person waiting