Israeli forces' flares light up the night sky in the northern Gaza Strip, early Saturday, July 19, 2014. Israeli troops pushed deeper into Gaza on Friday. (Photo: AP)
Gaza/Jerusalem: Israel on pressed on with its ground offensive and intensive air barrages to pound Hamas targets, taking the death toll from a 12-day bombardment to 333, as the UN chief headed to the region to bring an end to hostilities.
Israeli tanks and soldiers plunged deeper into Gaza and the fighting against Hamas led to a high toll of casualties and a doubling of displaced Palestinians to 40,000, as Gaza's bloodiest conflict since 2009 showed no signs of let-up. 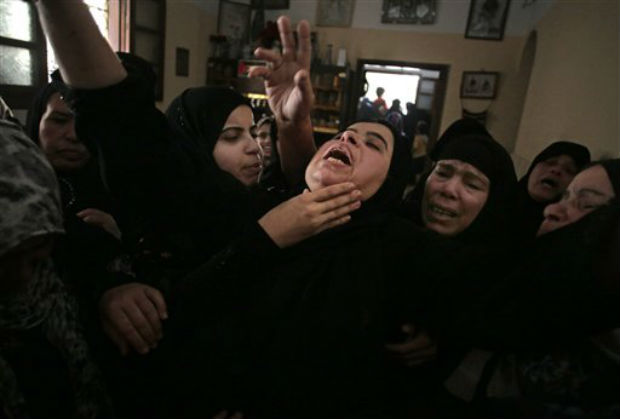 Palestinian relatives of Roshdi Naser, mourn during his funeral in
the Khan Younis refugee camp in the southern Gaza Strip, Saturday.
(Photo: AP)
UN Secretary General Ban Ki Moon was to arrive in the region soon to try to mediate between Israel and Hamas.
Ban's visit would aim to help Israelis and Palestinians "end the violence and find a way forward", UN political affairs chief Jeffrey Feltman said.
"Israel has legitimate security concerns, and we condemn the indiscriminate rocket fire from Gaza into Israel. But we
are alarmed by Israel's heavy response," Feltman said.
Netanyahu has warned of a "significant expansion" of the offensive but Hamas, the Palestinian group that controls Gaza, said Israel would "pay a high price" for the invasion.
Israel's ground operation followed 10 days of air strikes on Gaza, which failed to stop Hamas firing rockets across the border. 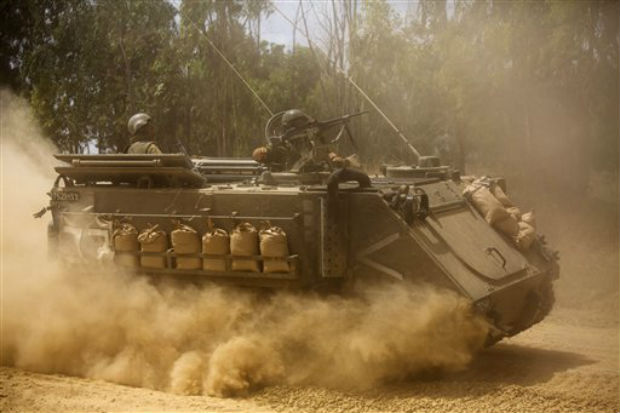 An Israeli armored personnel carrier moves near the Israel and
Gaza border, on Saturday. (Photo: AP)
Earlier today, Hamas terrorists attempted to infiltrate Israel through an underground tunnel and kill civilians in an Israeli community a few kilometres from Gaza.
Troops killed a Palestinian militant who tunnelled into southern Israel but others managed to withdraw into Gaza, an army statement said. Hamas use the tunnels to infiltrate Israel as it did in 2006 when soldier Gilad Shalit was kidnapped by the terrorist outfit.
"Several terrorists infiltrated Israel through a tunnel from the central Gaza Strip," it said, adding that they fired a machine gun and anti-tank missile at an army patrol.
Troops "returned fire, killing a terrorist and forcing the rest back into Gaza."
Hamas's military wing, the Ezzedine Al-Qassam Brigades, said its fighters had carried out the raid.
Three Israelis have died since the Operation Protective Edge campaign began on July 8. 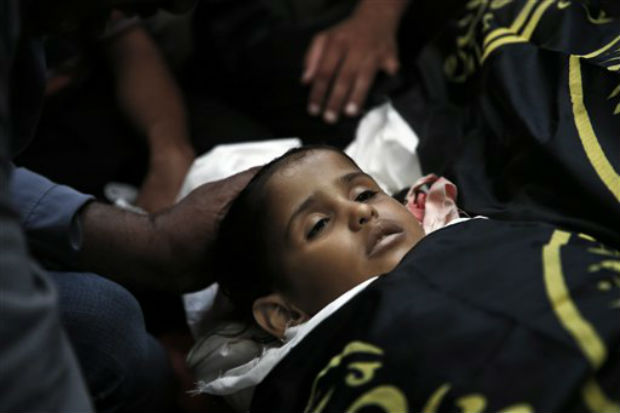 Mourners surround Sarah Omar el-Eid, 4, as they gather for her
funeral and that of her father, Omar, 26, and uncle Jihad, 27, at a
mosque in Rafah, Southern Gaza Strip. (Photo: AP)
Palestinians in Gaza have begun fleeing their homes every time Israel would issue warning that it was going to bomb a particular place. But the situation have become grim since the launch of ground offensive by the Israelis forces on Thursday.
"There is acute shortage of food, water and electricity. It is almost impossible to sleep during the nights due to heavy bombardment. Kids in my family are going through a trauma, wetting beds during the night, since a house was totally destroyed right behind ours", Gaza teenager, Karima.
Watch Video: Gaza resident: Where can I flee?
...
Tags: israel, gaza, world, palestinian