Patna: Bihar’s minister for arts, culture and youth affairs, Binay Bihari, on Monday sparked a minor furore in the Assembly with his statement linking the rise in the number of incidents of rapes with the presence of smartphones with girls.

“Smartphones in the hands of young people, especially girls, has caused more problems than it has solved. Smartphones have led to a rise in the incidents of rape,” said Bihari.

His statement attracted severe protests from women MLAs cutting across party lines while many male MLAs were heard supporting it.

Read: 10 free Android apps that can help to save your life

Bihari, a first-time minister who was inducted into the Jitan Ram Manjhi government in July’s cabinet expansion, however, said he did not mean girls were responsible for the rapes. His statement, however, was apparently viewed by many women MLAs to mean so. Post-lunch proceedings in the Assembly witnessed uproar over Bihari’s comments, prompting a number of women legislators to protest it as wrong-headed analysis of a social problem.

“The process of love has got a boost due to the availability of mobile phones. Rapes have also increased due to mobile phones in the hands of young girls. Sometimes wrong numbers dialled by mistake bring about relationships between boys and girls and pose problems,” said Sarfaraz Alam, the ruling JD(U) MLA from Jokihat, supporting the minister’s statements. 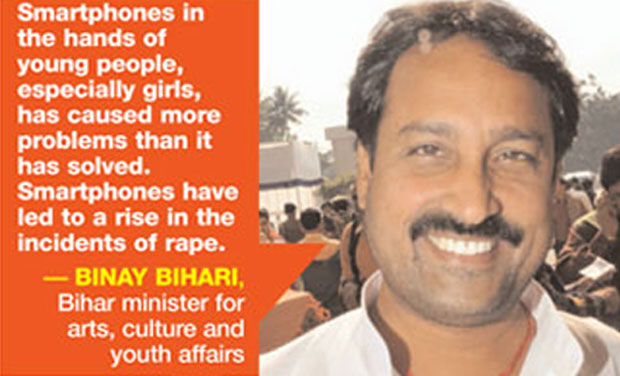 Vikram Kunwar, the BJP legislator from Raghunathpur, said: “This device called mobile phones is the main culprit behind so many incidents of rapes. Such incidents were fewer before mobile phones came. Guardians of young people have been careless in giving them mobile phones and not monitoring them.”

“Boys are 100 per cent responsible for rapes. It is the boys who do such kind of acts with the girls. Impressionable girls who step out of their homes mostly in the villages to towns for education or jobs often get lured by the boys into such acts,” said Neeta Chaudhary, the JD(U) legislator from Tarapur Assembly constituency.

In the past, several SP leaders had made similar disparaging and insensitive comments on women. Mulayam Singh Yadav, the father of UP Chief Minister Akhilesh Yadav and SP supremo also condemnable statements during Lok Sabha polls that rapists should not be hanged. “Boys make mistakes, but they cannot be hanged for that,” he said.

Only on Sunday, UP minister Abhishek Misra had again drawn flak for his party with his ‘insensitive’ remarks on women’s safety.

“We cannot deploy constable behind every woman in the state because this is practically impossible,” he said on Saturday.

Feeding firecrackers and killing not our culture: Javadekar on Kerala elephant death

Cyclone Nisarga now a depression over Vidarbha; IMD says it will weaken further