Kakinada: In a big boost to trade, the Kakinada deep water port will soon have a container terminal that can handle exports and imports including that of hardware, rice and seafood. Kakinada Sea Ports Limited has signed an agreement with PSA Singapore Terminals for setting up the cargo terminal in the deep water port which will be operational in the next three months.

Till date, the Kakinada deep water port had been handling bulk shipments. Initially the new cargo terminal would handle 1 lakh TEU (twenty foot equivalent) per annum and it would be escalated to 1 million TEU capacity.

Hardware, seafood, rice and other delicate products can be exported directly in containers via Kakinada port when the terminal becomes operational. At present these are taken to Vizag, Krishnapatnam and Chennai ports, which have container terminals. 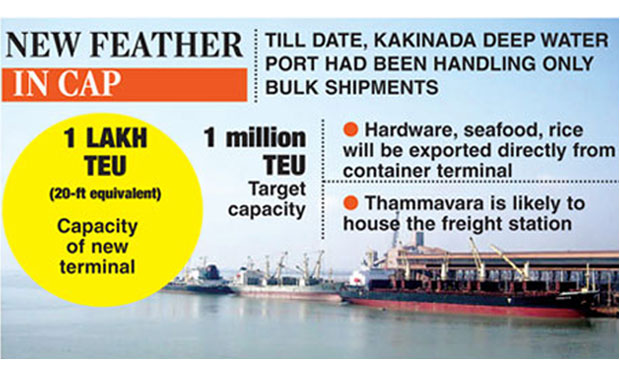 The container terminal will come in handy as the Centre had announced in the Union budget that Kakinada would be developed as a hardware hub and the port would be upgraded to handle hardware exports. KSPL deputy general manager M. Muralikrishna said, “We are tying up with several firms with expertise in this.”

All set for counting of votes in Atmakur by-poll today

Agnipath protests refuse to die down across India