However, inflation in many food items such as fruits, milk, egg, meat and fish, condiments, spices and coffee among others, continues to be in double digits. Fruits and protein based items like eggs as well as meat and fish contributed 8.9 per cent and 4.9 per cent respectively to the headline inflation in June 2014. Some analysts however were not prepared to welcome this without reservations that were predicated on the possibility of a poor monsoon.

India Ratings and Research (Ind-Ra) believes that “this could be a temporary blip as the delayed monsoon and the consequent spurt in vegetables prices points to the likelihood of inflation aggravating in a pattern similar to that of last year.”

In 2013 inflation had dipped to 4.6 per cent in May and later gradually increased and peaked at 7.5 per cent in November, it said.

Ind-Ra has noted that the budget has made an attempt to address some of the structural issues facing agriculture.

There is a proposal to set up a price stabilisation fund with a corpus of Rs 500 crore and start the PM’s irrigation scheme with a budgetary allocation of Rs 1,000 crore.
The budget has also allocated Rs 50,000 crore for creating warehouse infrastructure to strengthen the agricultural supply chain.

The inflation figures were quite confusing said Indranil Pan, chief economist, Kotak Mahindra Bank. Core WPI inflation rose to 3.9 per cent while core CPI inflation dropped off to 7.4 per cent. He felt the RBI should be watching out for the implications of the poor monsoon on food inflation, even as adequate steps are being taken by the government to prevent any spike.

Crisil research however said they do not expect food inflation to soar considerably due to the proactive measures already taken by the government and a strong base effect from last year.

It said, “in the longer run, announcements in the budget to boost agriculture and improve the supply chain will help bring down CPI inflation, but lowering and sustaining it around 6 per cent — the Reserve Bank of India’s target for January 2016 — will pose a challenge.” 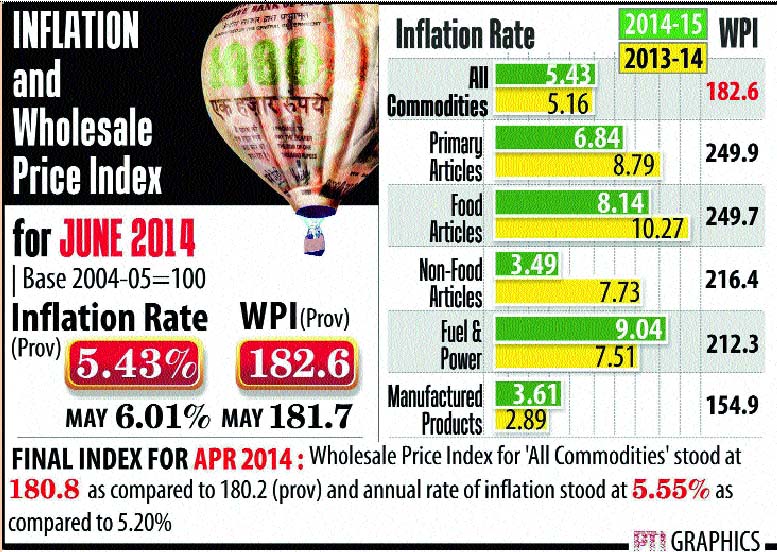