Khammam: The Indirasagar-Polavaram Multi-purpose Irrigation Project took a new turn with the passing of the Bill in the Lok Sabha, which paves the way for the Polavaram project in AP by merging seven mandals in Khammam district with Seemandhra.

The Centre will now have to float a company called Polavaram Construction Company (PCC) as a special purpose vehicle and fund 90 per cent of the cost of the project.

The Polavaram Project became controversial due to objections from Chhattisgarh and Odisha. After formation, Telangana has lately joined hands with the two states and is opposing the project pointing out that adivasis of seven mandals would be displaced with the project.

The proposed height of the dam is 150 feet. If it is reduced to 100 feet, only four villages will be submerged. But the Andhra Pradesh government is not ready to relent. Instead, it has been trying to get it increased to 154 feet to reduce the burden on projects on Krishna River to extend water to Rayalaseema through the Srisailam project. 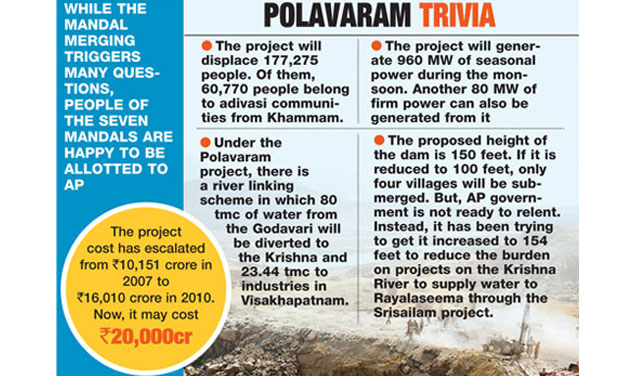 The Centre, however, might change the design of the project if the Central Water Commission advises so.

The Odisha government, meanwhile, has opposed the embankments, stating that large reservoirs with high spillway capacities will be constructed on Kolab (Sabari), Balimela and Lower Sileru. Water from these reservoirs will flow into the Godavari, thus impacting submergence and harming the embankments’ safety.

The forest clearance to the Polavaram project was given on the condition that Andhra Pradesh would construct embankments to avoid submergence.

Chhattisgarh too is insisting on reducing the height to lessen the submergence and it has also been urging for the safety of embankments of Sabari River on its side.

Bharat Biotech awaits feedback from WHO for Covaxin EUL