Veteran Bollywood actress Zohra Sehgal
New Delhi: Family and friends bid farewell to veteran actress Zohra Sehgal, who was cremated here today. The last rites of the 102-year-old actress, who died on Thursday, were performed at the Lodhi Road crematorium by her son Pawan in the presence of her daughter Kiran and grandchildren.
Former Delhi chief minister Sheila Dikshit, Shabana Azmi, Javed Akhtar, theatre personality MK Raina and Prasar Bharti CEO Jawahar Sircar were among those who turned up to pay their last respect. Zohra's body was kept in an open area for sometime for her admirers before being taken for the final rites.

Read: Bollywood’s Grand Old Lady Zohra Sehgal no more
Azmi remembered the actress for her vivacious personality. "I worked with her for the first time in a play in 2002. She was around 90-year-old at that time. She was always punctual at the rehearsals. She was thorough professional and always had a smile on her face. She always used to crack jokes," Azmi said.
Akhtar said it was not possible to write the history of 21st century theatre without Zohra Sehgal. "She had contributed a lot to every field where she had worked be it dance, theatre or cinema. She had a cheerful personality," Akhtar said. 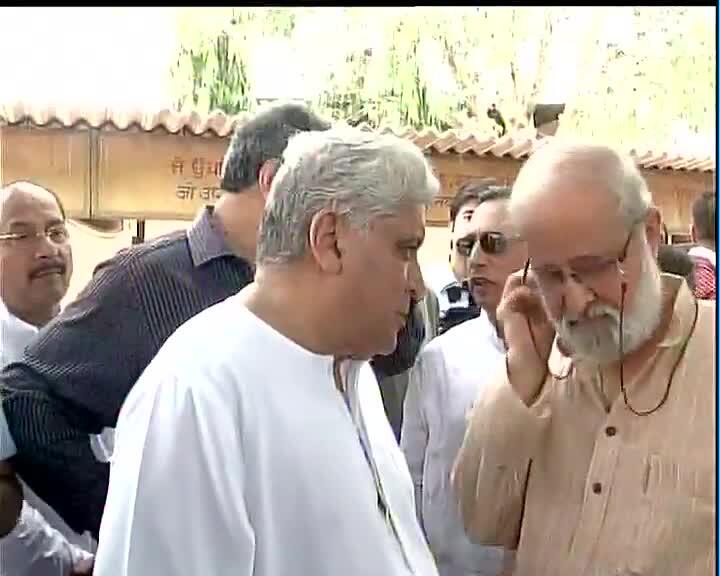 (Photo: Javed Akhtar and Activist Sohail Hashmi at Zohra Sehgal's last rites ceremony)
Dikshit said she had many inspiring memories of Sehgal. "It was hard to describe Zohra Sehgal. She was a great artiste and a very cheerful human being. She had a brilliant memory. Our country will always remember her. She never took anything negatively."

Read: Zohra Sehgal's death leaves a void in the world of art: Pranab Mukherjee
Raina said Sehgal's death marked the end of an era in theatre. "She was punctual and highly professional. She was always prepared with her dialogues. Her presence used to make the environment lively," he said.
The veteran star spoke about death at her 102 birthday in April this year, saying she was preparing herself to die with a smile. She had told her family that she wanted a simple funeral. Sehgal had a great innings as an artiste, performer and actor that spanned more than seven decades. She started her career as a dancer with Uday Shankar in 1935. She had appeared in many Bollywood films as a character actor as well as in English language films besides television series and plays.
Often called the grand old lady of Bollywood, she last appeared in Sanjay Leela Bhansali's 'Saawariya' in 2007. She worked with some of the biggest stars of this era be it Amitabh Bachchan in 'Cheeni Kum', Shah Rukh Khan in 'Dil Se' or Salman in 'Hum Dil De Chuke Sanam'. A Padma Shri awardee, she also received the Padma Vibhshan in 2010.

She was full of life till her last day, she loved living every moment of the 102 years-Javed Akhtar on Zohra Sehgal pic.twitter.com/c77LeqYzP3

T 1541 - Zohra Sehgal passes away at 102 yrs ..what a journey and what an immensely loveable co star ! Prayers for her blessed soul !!

RIP Zohra Sehgal . She will surely be missed ..

T 1541 - Zohra Sehgal ... she epitomised life, living and its zest .. a spirit that could shame a teenager, and a smile that lit up..the DOS

#RIP Zohra Sehgal. What a legend! What a life!

R I P Zohra sehgal! Wil always remember sharing kulfi with you on t sets of veer Zara!n all those pranks n laughter! Tat zindadili!u made

RIP Zohra Sehgal.....what a life....it's that moment when you truly celebrate the end of such a legendary and glorious era....

Prolific & full of life, Zohra Sehgal made a mark through her acting, which is admired across generations. Saddened on her demise.