Hyderabad: Both Telangana and Andhra Pradesh are hoping for the announcement of a new railway zone in the Railway Budget to be presented on Tuesday. Due to the huge demand for more connectivity between Hyderabad and Tirupati, Visakhapatnam, Shirdi,  Bengaluru as well as Jammu (via Delhi), introduction of more trains on these routes is needed. 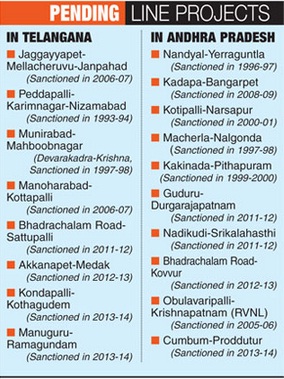 Telangana has a total of 883 km of sanctioned new line projects (at a sanctioned cost of Rs 5,001 crores). Many of these projects have been pending for almost 10 years. Also pending are double lining, tripling and electrification projects at the cost of Rs 295 crore.

Hyderabad: Not radicals, we follow the Constitution, claims PFI

Ministers’ Mission Kashmir: 51 visits to Jammu and only 8 to Srinagar

Nirbhaya hangings will not happen on Jan 22: Delhi govt to HC