Mumbai: A Romanian woman claims that her dead grandmother has tried to contact her from the other world, by sending her a selfie.

The localites of Scurtesti, situated in souteastern Romania, have been going to the churches regularly to pray for the grandmother's spirit.

According to the Daily Mail, Gina Mihai, 34, said: "When I switched the phone on I was horrified to see my dead grandmother's face. She had what looked like a snake around her neck, and the whole image looked as if it had been taken through a hole, like it was shot through a tear in the fabric that separates the living from the dead."

Mihai then contacted a fortuneteller who told her that her grandmother was being punished 'in the other life' because of her own mistake.

"I took it to a fortune-teller who told me that my grandmother was sending me a message from the other side, the snake around her neck was a symbol of the fact that she was being punished in the other life for some sin," she was quoted as saying.

Mihai feels it is her fault that her grandmother is being punished as she did not take food to her grave, which is a traditional Romanian belief.

‘My grandmother died three years ago and I haven't taken any food for her to the graveyard. I was making doughnuts at the time and didn't want to get the phone dirty so I put it in my pocket, and when I took it out there was the image on the phone,’ Mihai said. 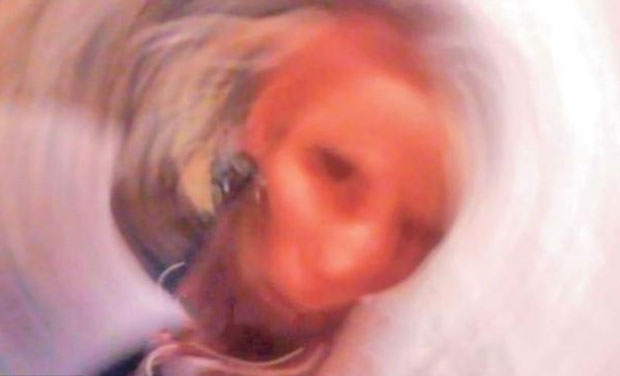