Kabul: The campaign team of Afghan presidential candidate Abdullah Abdullah on Sunday released audio recordings which they said contained evidence of fraud against a senior member of the country's Independent Election Commission.

The accusation came as hundreds of Mr Abdullah’s supporters held protests against alleged irregularities for a second day across Kabul, as a political stalemate deepens in the country.

The protesters chanted “Long live Abdullah” and called for the death of Afghanistan's electoral commission chief, who is handling the fraud allegations.

Mr Abdullah won the first round of the poll to succeed President Hamid Karzai, gaining 45 per cent of the vote while his nearest rival Ashraf Ghani won 31.6 per cent.

But he boycotted the vote count after the second round run-off, accusing Mr Karzai of favouring his rival. 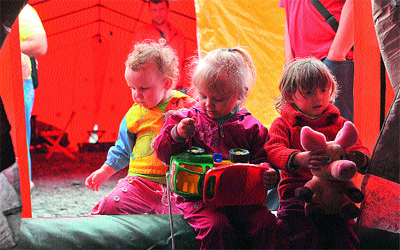 Children from eastern Ukraine sit in tents at a temporary facility for Ukrainian refugees in the southern Russian Rostov region on Sunday. Ukraine’s unilateral ceasefire hung in the balance after clashes engulfed the separatist east    — AFP

China vows to retaliate if Chinese journos forced to leave US

COVID-19: Over 50,000 Indians repatriated from Oman since May

Kerala girl falls to death from apartment building in Sharjah