Related Stories
Nation, In Other News

New Delhi: As uncertainty mounted for students following the row over the four-year undergraduate programme of Delhi University, government today made it clear that it will not intervene and wanted the UGC and DU to resolve the matter between themselves.

Union HRD Minister Smriti Irani held two meetings on Monday with University Grants Commission (UGC) Chairman Ved Prakash, a day after the higher education watchdog directed DU and all 64 colleges under it to conduct admission only under the three-year undergraduate programme or face "consequences".

The UGC had sought compliance of its orders by forenoon on Monday.

Prakash also held a meeting with Delhi University Vice Chancellor Dinesh Singh, who is in the eye of the controversy for introducing the 4-year UG programme in DU last year. Secretary Higher Education Ashok Thakur was also present during this meeting.

Sources say Irani is also understood to have expressed her displeasure over the delay in solving the matter with the DU authorities as the admission process to the undergraduate programme kicks off from tomorrow.

Irani is of the view that the government should not intervene and that UGC and DU should sort out the matter between themselves and ensure that precious time of students is not wasted, the sources said.

The sources added that DU has not sought the approval of the Visitor, who is the President of India for the FYUP Ordinance and neither was it sent to the HRD Ministry or sent to the President before introducing the course.

Sources said the DU has neither taken the mandatory permission of the UGC before introducing the FYUP course and thus the controversial FYUP has "no legal validity". 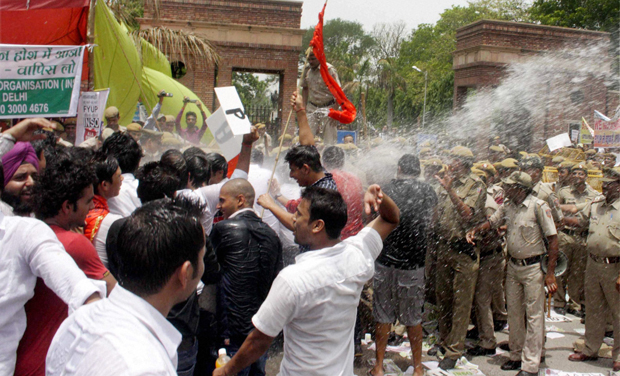 Police in action against ABVP activists during a protest over the four-year undergraduate programme (FYUP) of Delhi University in New Delhi (Photo: PTI)

Sources also claimed that the previous UPA government "misled" Parliament on the programme by saying that the DU had all necessary clearances before introducing the new course.

UGC has formed a Committee to ensure smooth migration/ transition of those students enrolled under FYUP programme last year.

The row took a new turn as colleges affiliated to Delhi University deferred the admission to the academic session 2014-15.

After an emergency meeting of the Principals Association of the Delhi University, its president S K Garg announced that they decided to defer the admission process, that was to begin on Tuesday, until clear-cut guidelines are issued by the competent authority on the issue.

DU's Academic Council on Saturday passed a resolution, saying students seeking admission to undergraduate programmes would be admitted in three-year Bachelor's Programme (B.A/B.SC/B.Com) in their Discipline 1 (major subject) and would graduate with the corresponding degree on three years in conformity with NPE.

The Four Year Undergraduate Programme (FYUP), introduced last year, has drawn flak from both students and teachers but the Delhi University has held that it will not be scrapped.

With admission to the undergraduate programme beginning on Tuesday, hassled students are hoping for clarity and a quick end to the UGC-DU row.

"Under no circumstances shall the University of Delhi or any of the colleges under it admit students to the FYUP for academic year 2014-15," the UGC said in a statement on Sunday.

"Any deviation from this directive either by the University of Delhi or any of the colleges under it shall be deemed to be in contravention of the UGC Act, 1956 with its consequences," it warned.

The UGC said it would be ensured that students, who were admitted in 2013-14 in FYUP when it was introduced, are able to migrate to the three-year programme.

Students' and teachers' bodies have demanded scrapping of the FYUP.

Various student bodies today demonstrated in front of the HRD Ministry here demanding roll back of the programme.

On the other hand, a ten-member committee, set up by UGC and headed by Prakash, is meeting for the first time to discuss the smooth transition of the under graduate programme from four years to three years.

Contributing for construction and prayers at Masjid in Ayodhya is ‘haraam’: Owaisi