Stuart Broad added one more Test hat-trick against his name as he dismissed Sangakkara, Chandimal and Shaminda Eranga on consecutive deliveries in the second Test. Photo: AP

Leeds (United Kingdom): Liam Plunkett took his Test-best figures and Stuart Broad his second Test hat-trick as Sri Lanka were bowled out for 257 by England on the first day of the second Test at Headingley on Friday.

Fast bowler Plunkett, on his Yorkshire home ground, took five for 64 in only his second Test in seven years after he was recalled for the drawn first match of this two-Test series at Lord's. 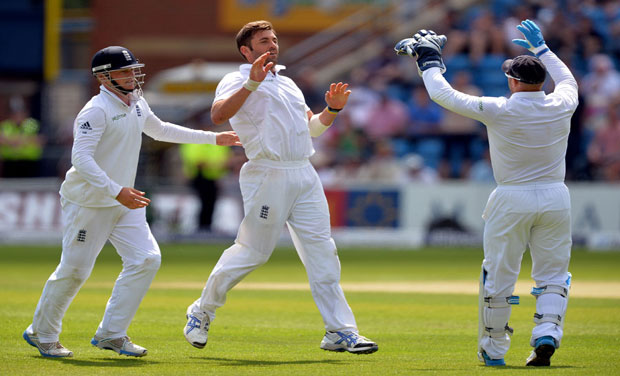 Broad, who previously took a hat-trick against India at Trent Bridge in 2011, became the first England bowler, and only the fourth in all, to perform the feat twice in Tests after Australia's Hugh Trumble, Jimmy Matthews and Pakistan's Wasim Akram, when he removed Kumar Sangakkara (79), Dinesh Chandimal (45) and Shaminda Eranga with successive deliveries split across two overs.

England at stumps were 36 without loss.

Alastair Cook, the England captain, was 14 not out and Australia-born opener Sam Robson 21 not out.

"This was more for me, I wanted to perform at Test level and picking up five feels like I've done that," said Plunkett.

Asked whether he or Broad would keep the match ball, Plunkett jokingly replied: "I've got it but I'll cut a bit of the seam off for Stuart."

England, who had seen Cook win the toss and opt to field first in overcast conditions were clearly confident of inflicting a fresh collapse upon Sri Lanka having come within one wicket of victory after dismissing nine of the tourists' batsmen on the last day at Lord's.

But England's early good work threatened to be undone by Sri Lanka star batsman Kumar Sangakkara, who was given four reprieves on the way to top-scoring with 79.

Sangakkara's innings was his third score in excess of 50 in this series, after he made 147 and 61 in at Lord's, and also the sixth successive Test innings in all that he'd past the half-century landmark.

The left-hander could have been run out on nought and was then caught behind on 16, only for neither bowler Plunkett nor wicketkeeper Matt Prior to appeal.

He was given a further life on 27 when Prior dropped a routine catch, again off Plunkett, and missed again on 57, when Moeen Ali failed to hold a far tougher chance at backward point.

Sri Lanka, with Headingley bathed in bright sunshine after the early morning gloom, were making good progress at 228 for five.

But Sangakkara eventually exited when he square-drove at Broad and Ian Bell, in his 100th Test, held an excellent catch in the gully.

His departure sparked a collapse that saw four wickets lost for one run in nine balls.

"The wicket started to play pretty well but flattened out, some good balls in the right areas and the tail not wagging for too long probably cost us 75 runs," Sangakkara said.

Plunkett, who had already performed impressively Friday, then had Dhammika Prasad caught behind for a duck.

Broad returned next over and ended an enterprising knock from Chandimal, playing in place of injured wicketkeeper Prasanna Jayawardene, when he was caught by Cook at first slip.

Broad then had his hat-trick when tailender Eranga was caught behind although neither the bowler nor his England team-mates were aware of his feat until an announcement was made over the public address system.

Plunkett, appropriately, ended the innings when he had Nuwan Pradeep, who'd frustrated England at Lord's by holding out for the final five balls of the match, caught behind.

The 29-year-old Plunkett surpassed his previous Test-best of three for 17, also against Sri Lanka, in Birmingham in 2006.

Sri Lanka thought they had Cook caught at slip by Sangakkara on five but, with replays inconclusive, the left-hander survived.

"I felt I jammed my fingers under it, but sometimes you really don't know," Sangakkara said.

There was further drama before stumps when play was briefly held up after a piece of cheese was thrown from among the crowd in the Western Stand at Eranga.

Revenge can't be on mind when you take on Kiwis: Virat Kohli