Indo-Tibetean Border police personnel carrying out search operations for the missing Hyderabad engineering students, in the Beas river in Kullu on Wednesday. (Photo: PTI)&#13;
Mandi: The unseen footage of around four minutes long, has been released by a local news oragnisation on a social media website which show the last few moments of students stuck in the Beas River. The video presumably taken by one of the colleagues of drowned students covers their ill-fated day and shows the students travelling all the way to Beas River.
Watch Video: Unseen footage of minutes before the Beas River tragedy
Himachal Pradesh chief minister Virbhadra Singh on Sunday has said the drowning of 24 students in Beas River was not caused by negligence on the part of authorities, according to television reports.
Read: No negligence behind Beas river tragedy, says Himachal Pradesh CM
24 people were washed away, at Thalaut in Mandi district, when water was released into the river without warning from a hydropower project on June 8, Sunday. A probe is going on and conclusions can be drawn only after that, Singh told reporters.
Read: 24 Hyderabad students drown in Beas river; Chandrababu Naidu announces ex-gratia
Meanwhile, a high-tech device was on Sunday pressed into the search for the 17 persons still missing after the tragedy in Beas river with rescue teams resuming their efforts on the seventh day following the mishap of June 8.
Read: Beas tragedy: 1 more body recovered, search enters 4th day
Assisted by over 50 expert divers, rescue teams resumed their search equipped with the 'Side-scan Sonar' device to locate the bodies of the 16 students and a co-tour leader who are feared to have been drowned in the Beas. Eight bodies have been so far recovered by the rescue personnel. 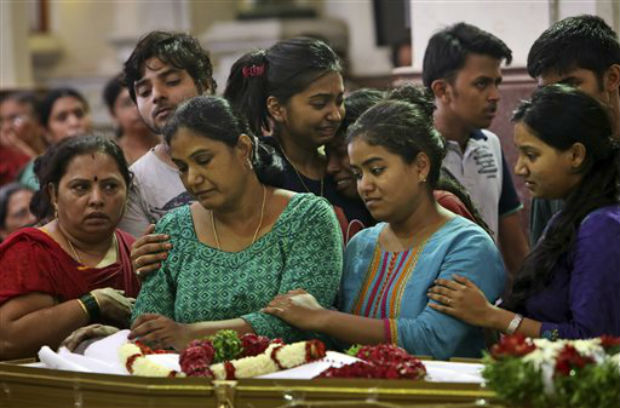 Relatives mourn with the mother of Devasish Bose, second from left. (Photo: PTI)
"Side-scan Sonar-fitted boats have commenced scanning the river bed to help locate the bodies," said Jaideep Singh, Commanding Officer of National Disaster Response Force (NDRF).
Read:  Help came in hours later, claim Hyderabad students who survived Himachal river tragedy
The advanced equipment is a specialised system for detecting objects on the seafloor or river bed and conducting hydrographic surveys with side scan and multi-beam sonar. Sonar, or sound navigation and ranging, uses sound waves to find and identify objects in water and determine water depth, transmit sound energy and analyse the return signal (echo) that has bounced off the seafloor or other objects. Side-scan sonar typically consists of three basic components: tow fish, transmission cable, and top-side processing unit.
Read: Families for Beas victims return
The cable, topside processing unit and the transmitted energy is formed into the shape of a fan that sweeps the seafloor from directly under the tow fish, typically for a distance of 100m on either side. The strength of the return echo is continuously recorded, creating a "picture" of the ocean bottom, experts operating the system said.
After the eight bodies were recovered, the search operation has failed to trace the rest of the missing persons in the past two days even though the water level at Pandoh Dam was lowered to a minimum yesterday to aid rescue efforts.
Most of the bodies which have been recovered were either trapped under rocks and huge boulders or sunk into the silt on the river bed within a 3-km radius of the accident site at Thalaut on the Kitarpur-Manali National Highway-21. 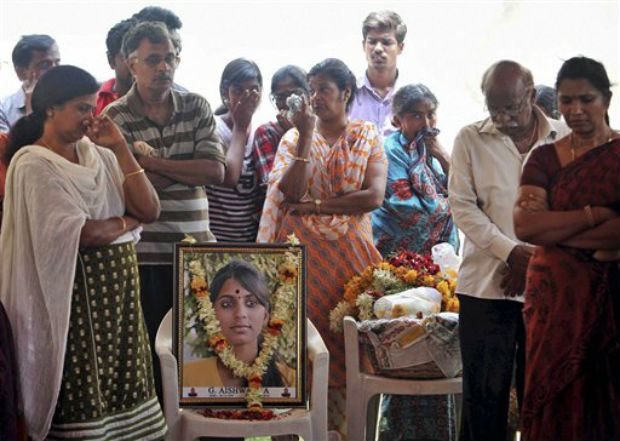 Relatives and family members mourn as they attend the last rites of Gampala Aishwarya. (Photo: PTI)
Telangana Home Minister Nayani Narasimha Reddy, who has been camping here for the past six days, said, "We can now go in for the possibility of opening the gates of the Pandoh Dam to drastically reduce the water level in the reservoir to facilitate sighting of the bodies. However, any decision in this regard will be taken with the consent of the parents."
He said that some of the parents of the missing students have expressed apprehension that the bodies might have been washed away in the turbulent waters of the Beas, downstream from the dam.
As many as 25 members of a group from Hyderabad's VNR Vignana Jyothi Institute of Engineering and Technology, who were on an excursion to Manali, were swept away in the river after sudden release of water from the reservoir of the Larji hydro-power project near Thalot.
...
Tags: himachal pradesh